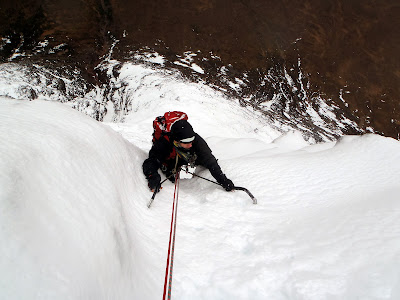 With bad weather arriving at about lunch time Andreas and I went to Buachaille Etive Mor to climb North Buttress. Not surprisingly the route is buried in snow! In some places this was useful and in others it was a bit of pain. The approach up the broken rocks was a bit easier than normal because many of the rocks are covered in snow. We found a boot trail as well which made it much easier too.

On the climb the quality of the snow varied from weight bearing under foot to totally useless but hard work to dig away. A single pick would never have been sufficient to hold body weight but with two of them and by focusing on good footwork it all seemed to work out OK. Spreading my weight over three points of contact was usually enough to make me float. All very good for your technique but a bold approach is useful. It is also useful to learn the precise density of snow required to hold your weight. 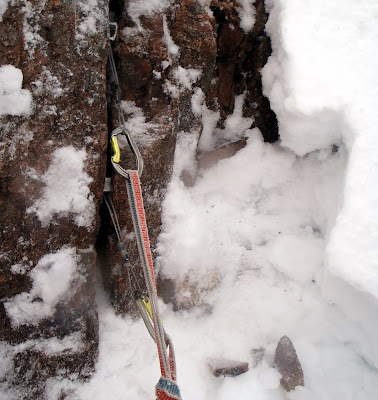 Under the snow the rocks and turf are not frozen. There is a little ice but most of the rocks are not frozen in place. This made it easier to look at placing wires on belays (Andreas is Swiss and wants to practice placing anchors). I was grateful to know where some of the good spikes are for belays since everything was so well covered. 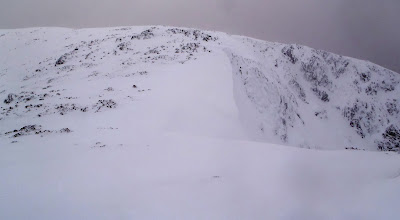 There is a trail up Curved Ridge and a large area of avalanche debris under Crowberry Basin. Crowberry Gully is very full of soft snow and even the mixed routes on Crowberry Tower such as Shelf Route are so buried that it will be hard to climb them. A big cornice and steep scarp slope have formed at the top of Coire na Tulloch but we managed to sneak down the east side of the coire and got down with a good glisade to find even more avalanche debris from a couple of nights ago down in the gorge. It's an Ice Factor day tomorrow - windy, warm and wet. 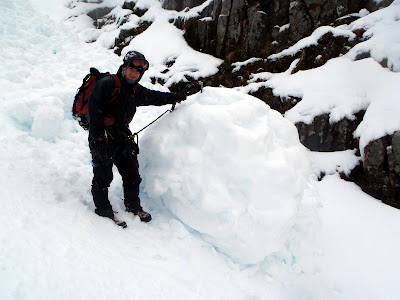