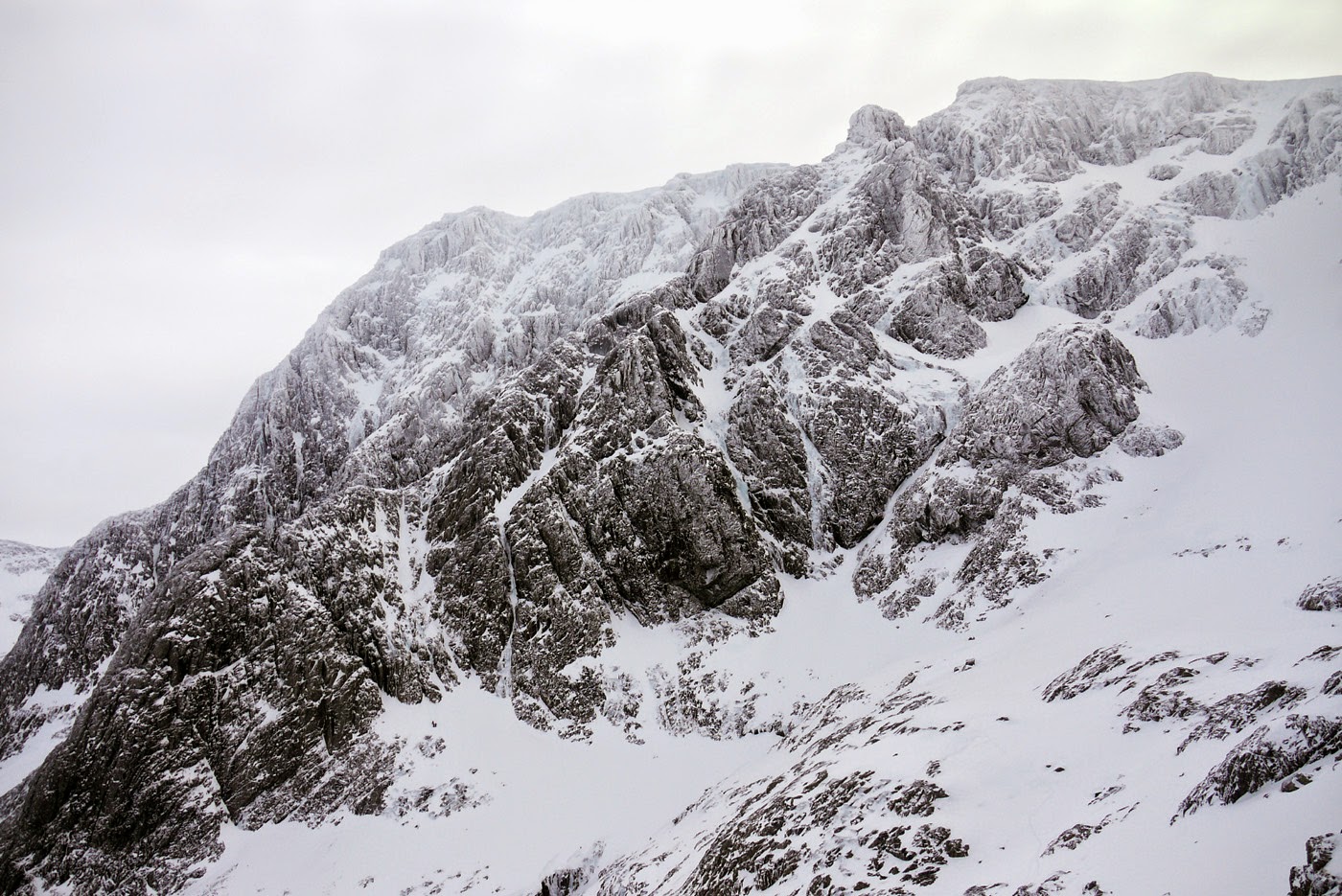 All of these pictures were taken yesterday, Wednesday 4th February.

Since the snow came down to sea level on Wednesday morning last week it has stayed there and is only now showing signs of melting away. It has been a cold week with generally northerly winds and just a few small falls of fresh snow.

Snow cover starts at sea level and is quite hard going in places. There has been some drifting of the snow and some slopes (mostly facing NW) are scoured. All the big gullies are very well filled out with snow and because the wind has been blowing up them the cornices are generally small.

The great ridges are well covered and have some very nice icy snow in corners and runnels. Ledge Route is entirely on snow apart from a few rocks poking out in the narrow sections. Tower Ridge has had many ascents and is very good. 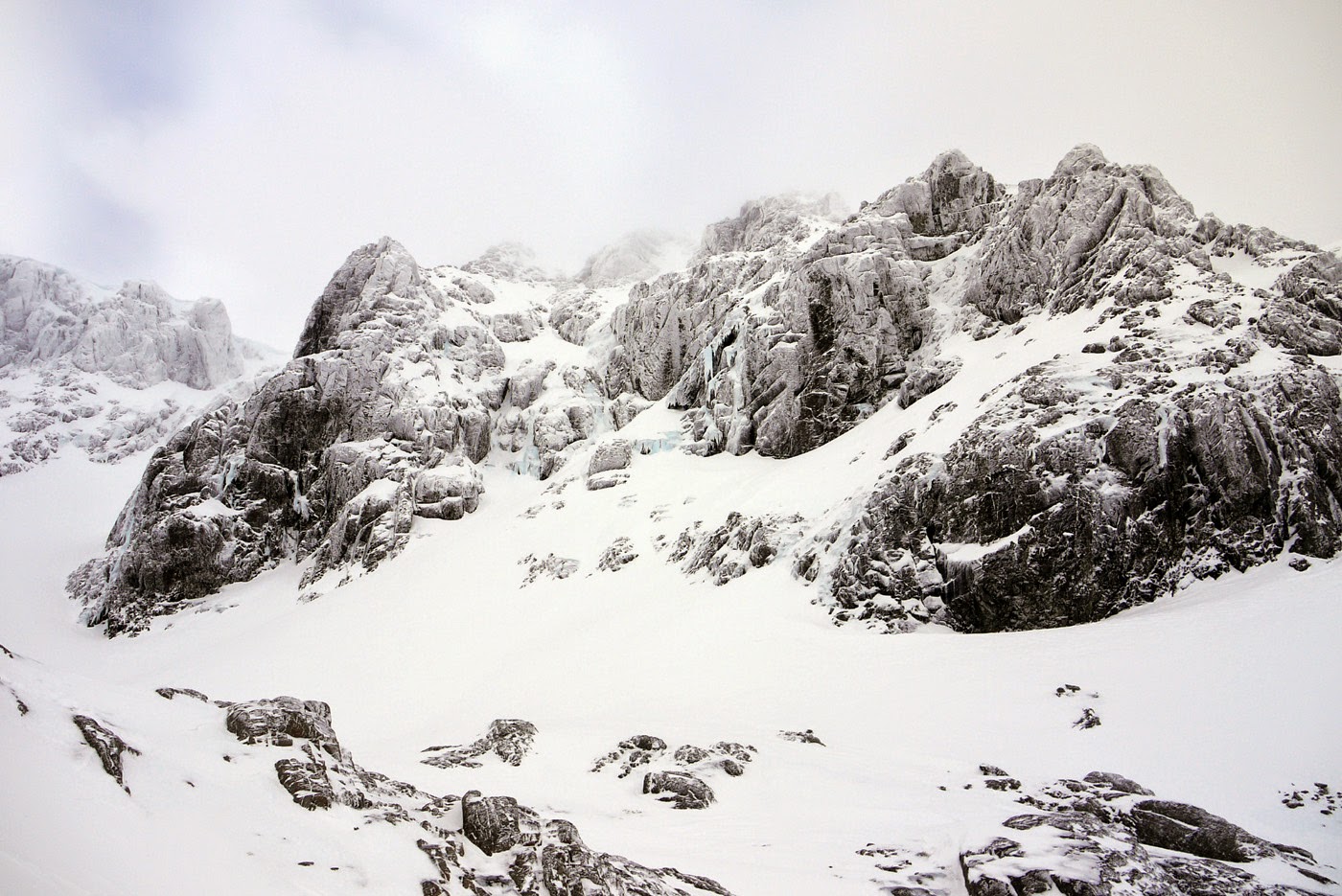 Mid-level ice climbs have been very popular this week. The Curtain has had many ascents and is in great condition. Vanishing Gully, Italian Right Hand, The Shield Direct, Gemini and Waterfall Gully have all been in brilliant condition. Mega Route X and The Shroud are growing but only slowly. They need more water to drip from the snow fields above them for more ice to form. There is also plenty of ice in other locations. Norwand looks as good as I've ever seen it. 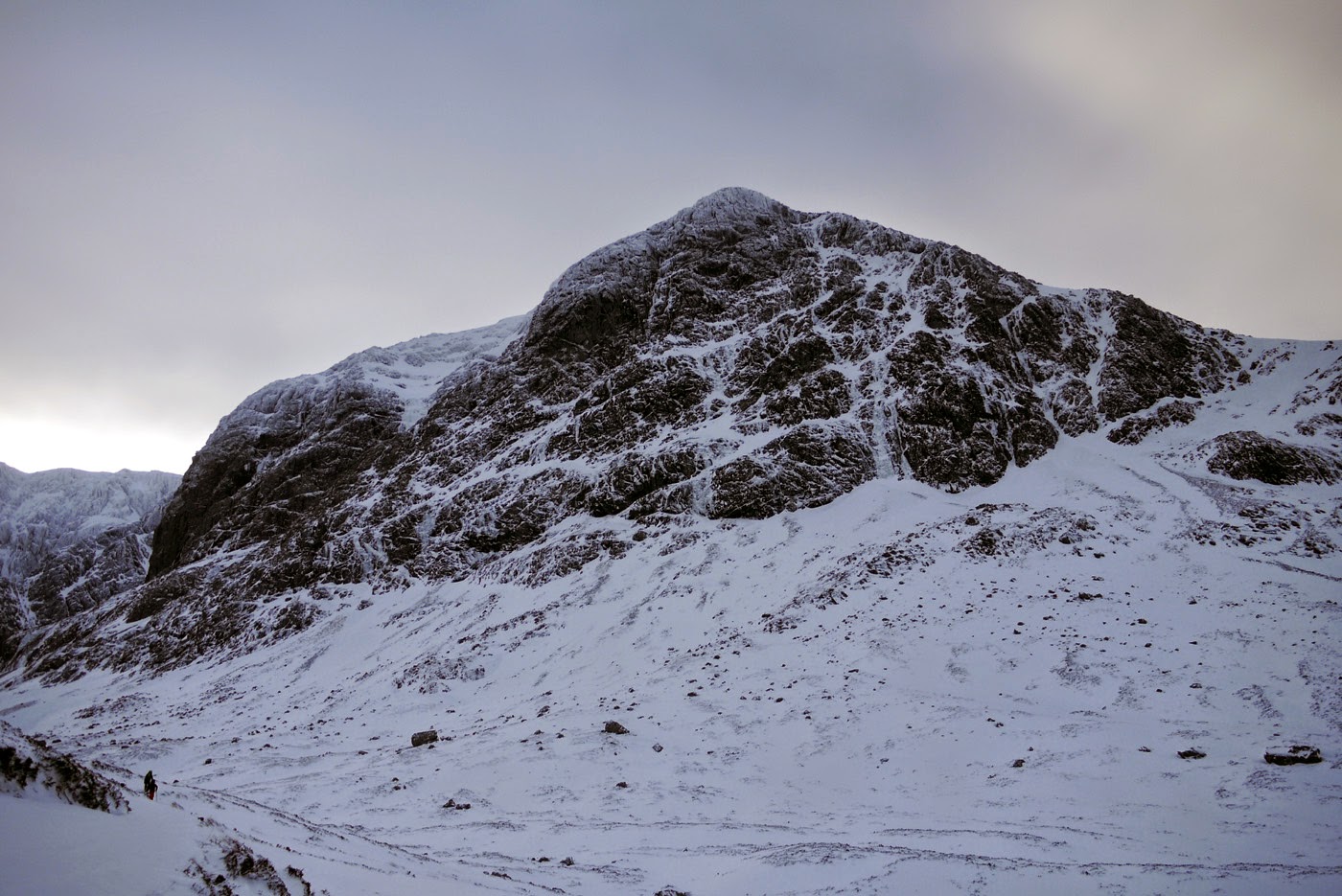 Of the big classic ice climbs Zero Gully, Hadrian's Wall Direct, Sickle (after the first pitch of Hadrian's Wall Direct) and Point Five Gully have all been enjoyed by several teams. The Minus Gullies are still a bit lean and the top half of Orion Face is not very icy so these routes have not been climbed as far as I'm aware. Smith's Route and The Cascade are well iced up but a long way up deep soft snow to get to! 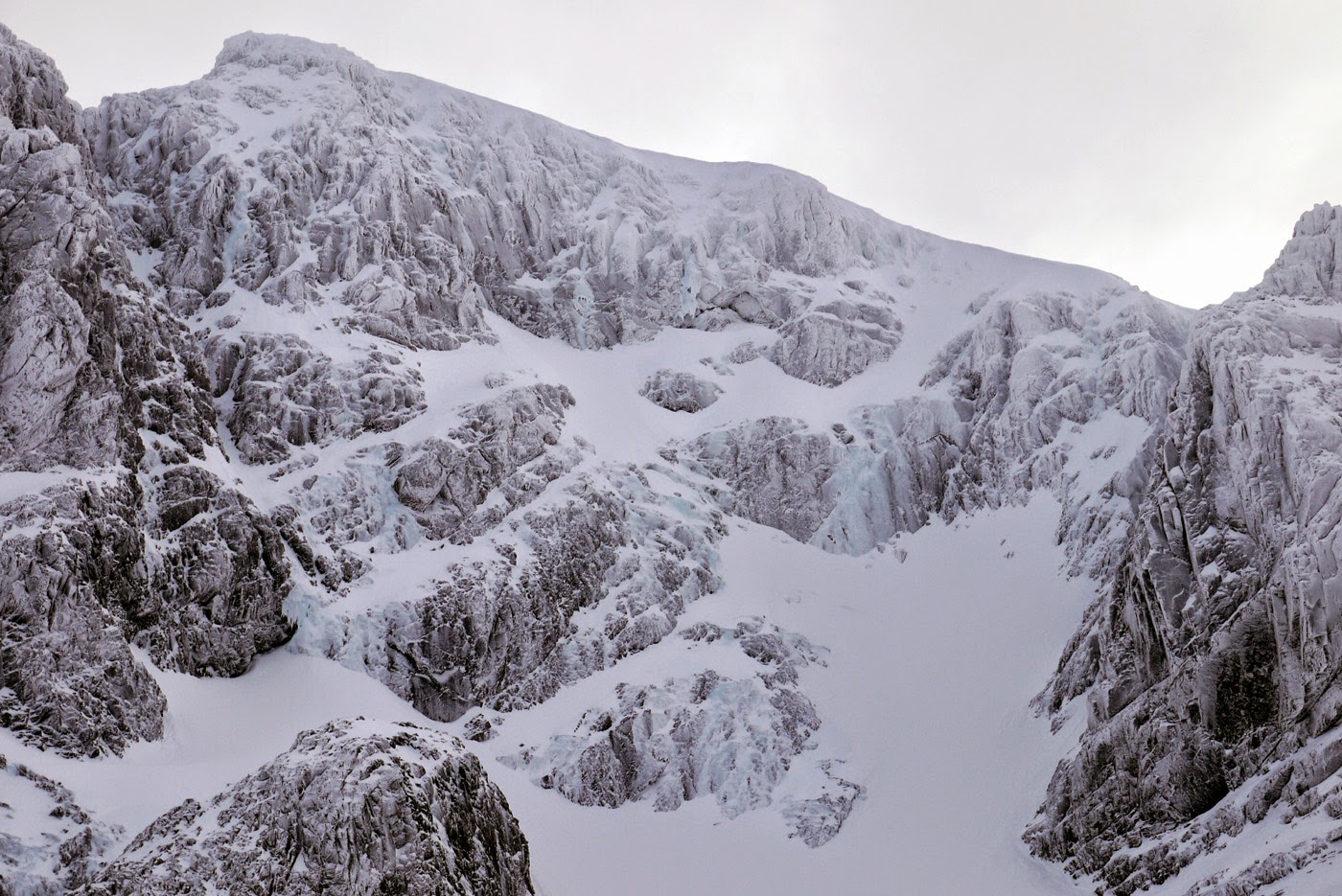 The climbs higher up in Coire na Ciste have not been climbed much at all because it is hard work getting there but just about all the grade III and IV routes are looking good. The crags are rimed up with thick icy rime and there is ice in the cracks so mixed climbing could be a bit tricky. 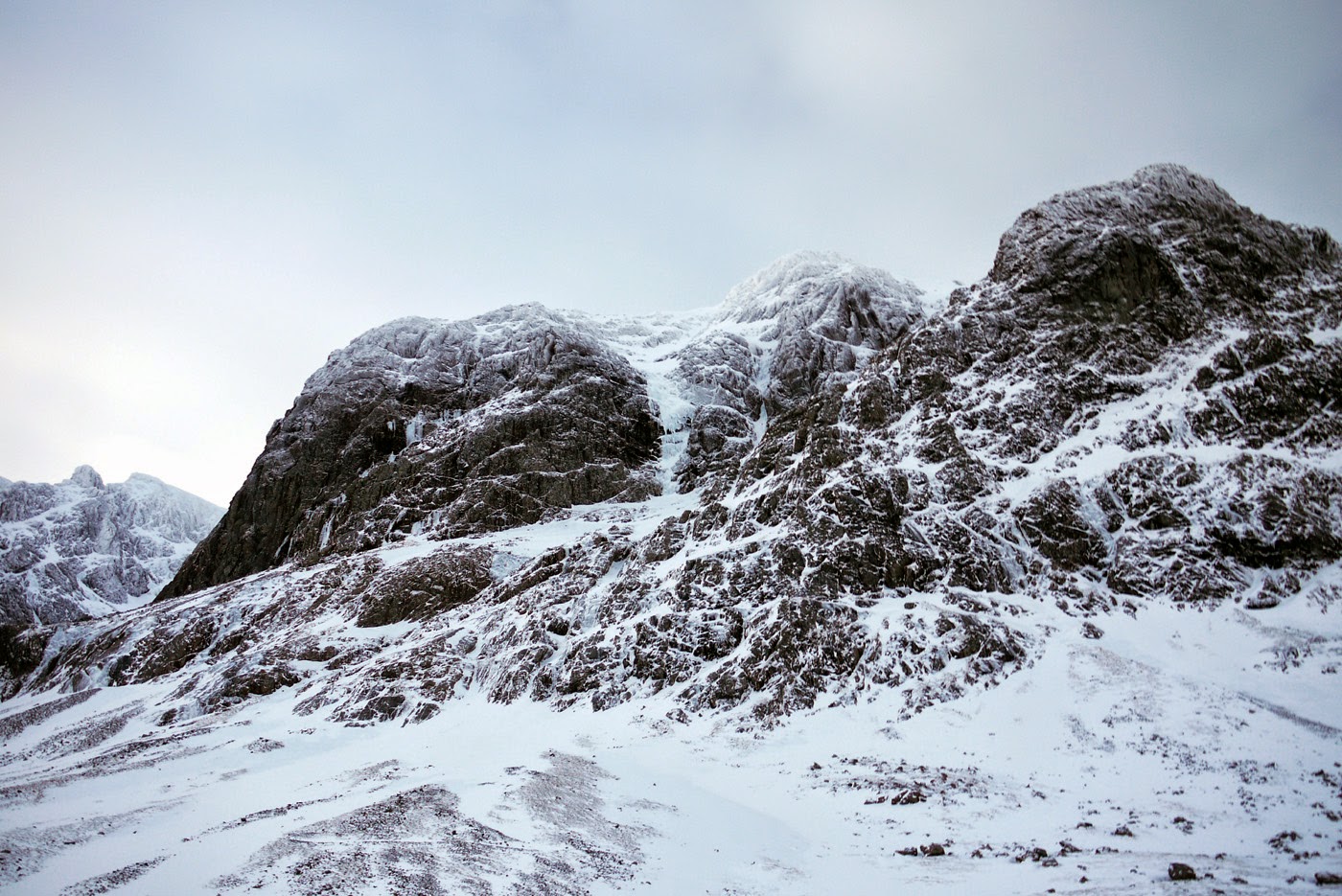 We now have slightly more humid and slightly warmer conditions which will soften the ice and make the snow go a bit soggy lower down and in the sunshine. However it is not a big thaw and in fact we might get some days when the climbs are above a sea of cloud.