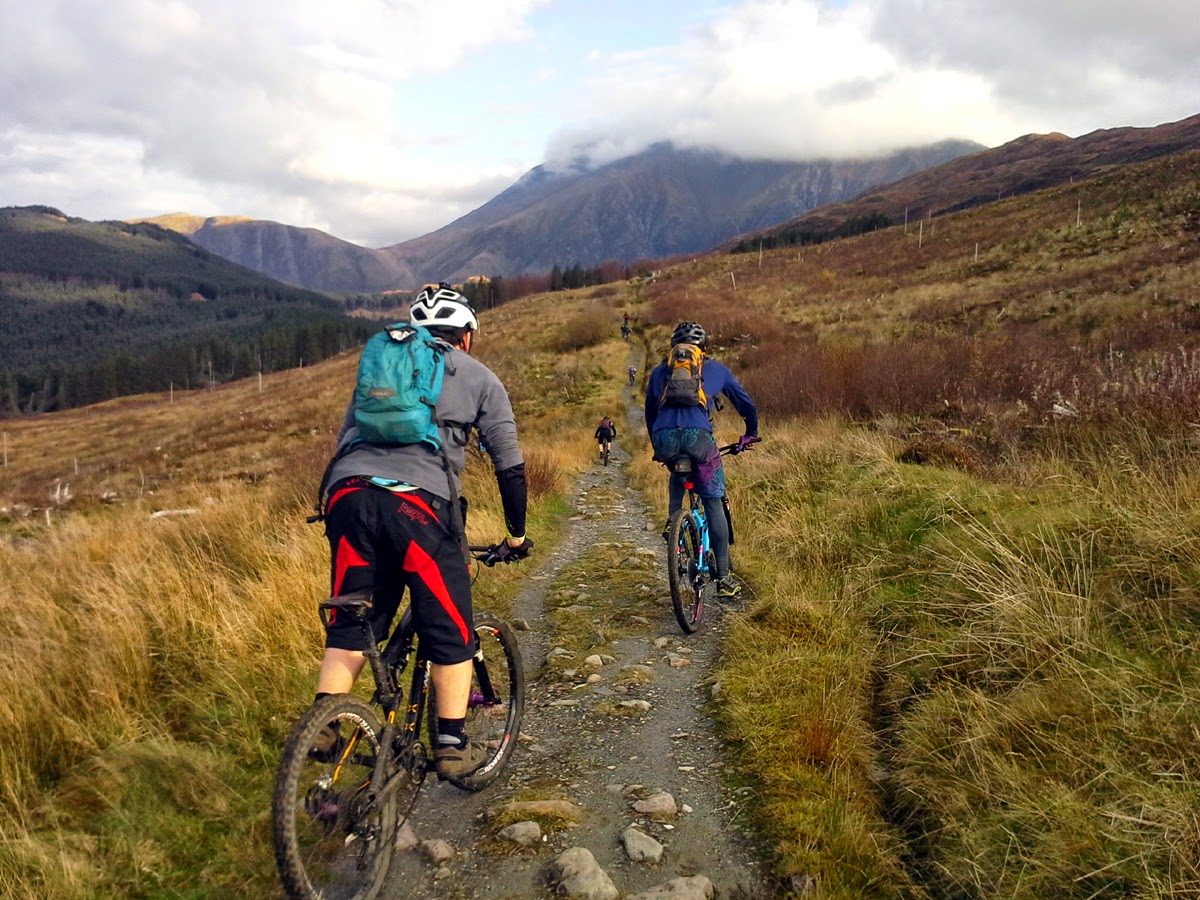 It was a nice day for a wee spin on the bike today from Lundavra to Nevis Range. Riding with Advanced Certificate in Outdoor Leadership students, getting them ready for a three day tour of Ben Nevis next week, we went along the West Highland Way to Glen Nevis, enjoyed some single track into the glen and along the river bank before a really tough climb up the Peat Track. The awesome descent down the side of Cow Hill took us back to the glen then along the Puggy Line to finish with the Blue Adder at Nevis Range.

All the guys did well and are looking forward to the trip next week. It looks like we might get some colder weather with snow on the tops at the end of next week. I really hope so but I don't really want to be out riding in it either! 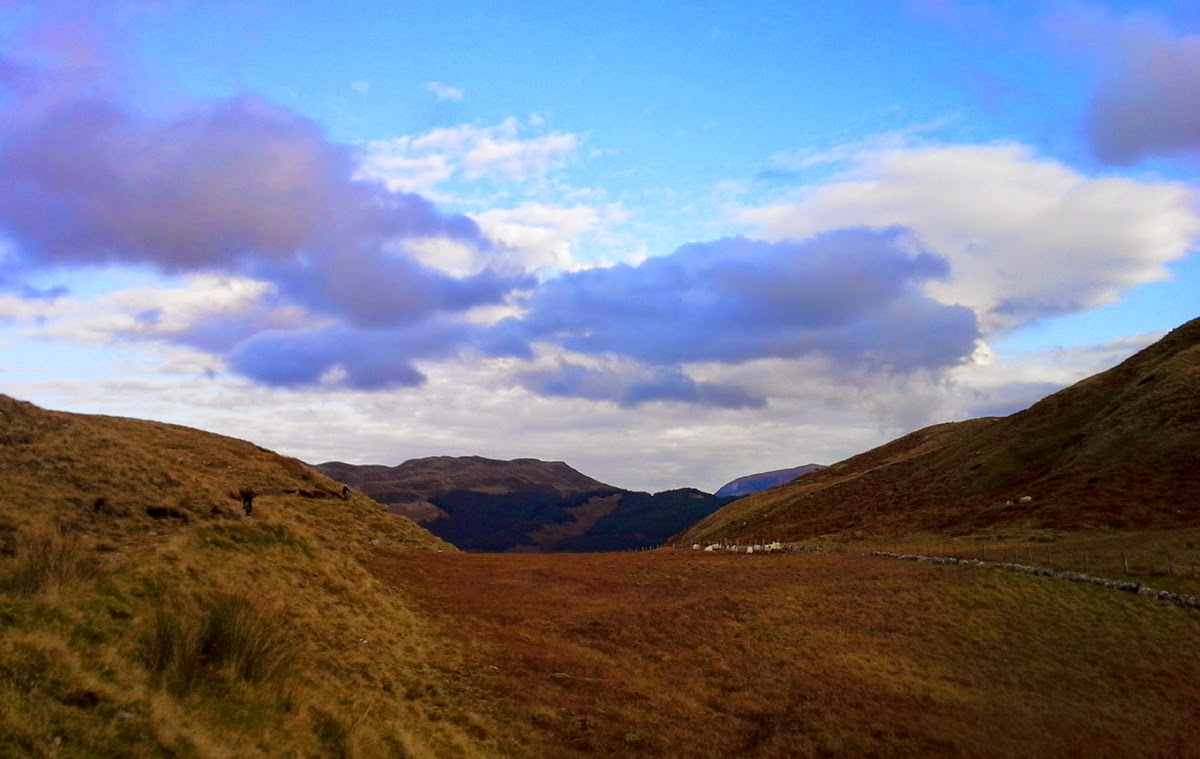 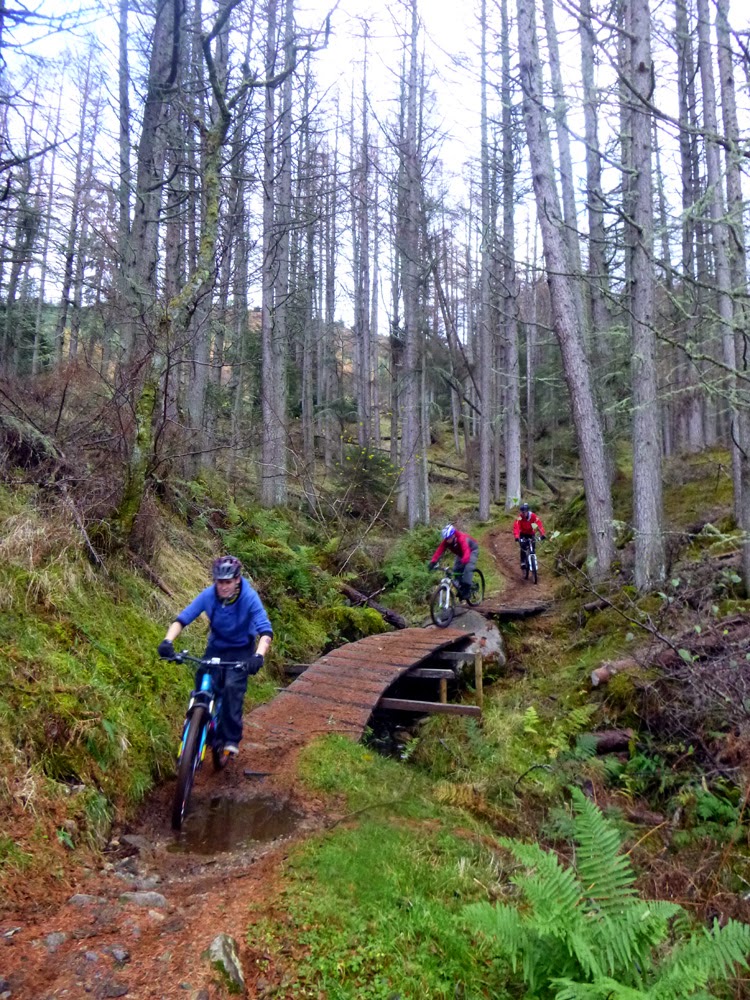 Bright orange larch needles cover the Witches Trails at Nevis Range. The students studying the Advanced Certificate in Outdoor Leadership at West Highland College have moved on from walking and indoor climbing to mountain biking. There are some great riders in the group and we have just a couple of days to get them ready for a three day expedition round Ben Nevis. We started out with a warm up and check of core riding skills, making sure the riders can change gears, use their brakes effectively and move around on their bike to ride in an attack stance. We then went off to ride lots of red graded trails and ungraded natural trails in the woods to coach some cornering technique and have a good spin of the legs. Dry, cloudy and warm today, I was riding in just my thin shirt this afternoon! 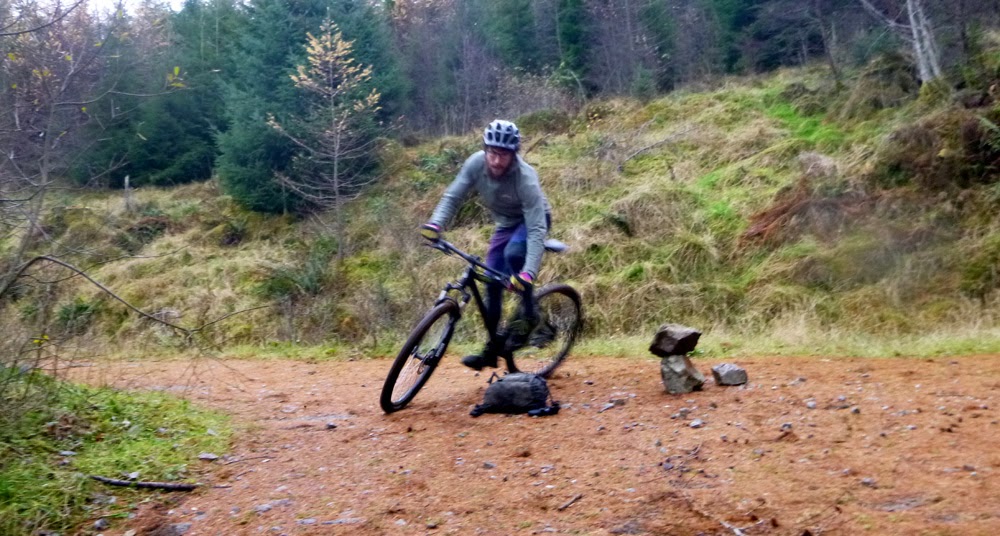 We have had some cold periods this Autumn with snow sitting on the hills for a few days and the first few winter climbs have been completed in the Northern Corries of the Cairngorms. Despite this, the hills are depressingly snow free at the moment and it has been wet and a bit warm for the time of year.

The Ben Nevis North Face Survey that we started this year (the first of three years) taught us that the rare and delicate plants growing on the north face cliffs need a good cover of snow to protect them in the winter months. The short growing season when they are uncovered by the snow in the summer months also gives them an advantage over other plants as they are so specialised and adapted to this environment.

Dave MacLeod was with us on the survey to film the action. He is putting together the finishing touches to the film now which will be premiered at the Fort William Mountain Festival in February. In the meantime, here's the teaser to whet the appetite. 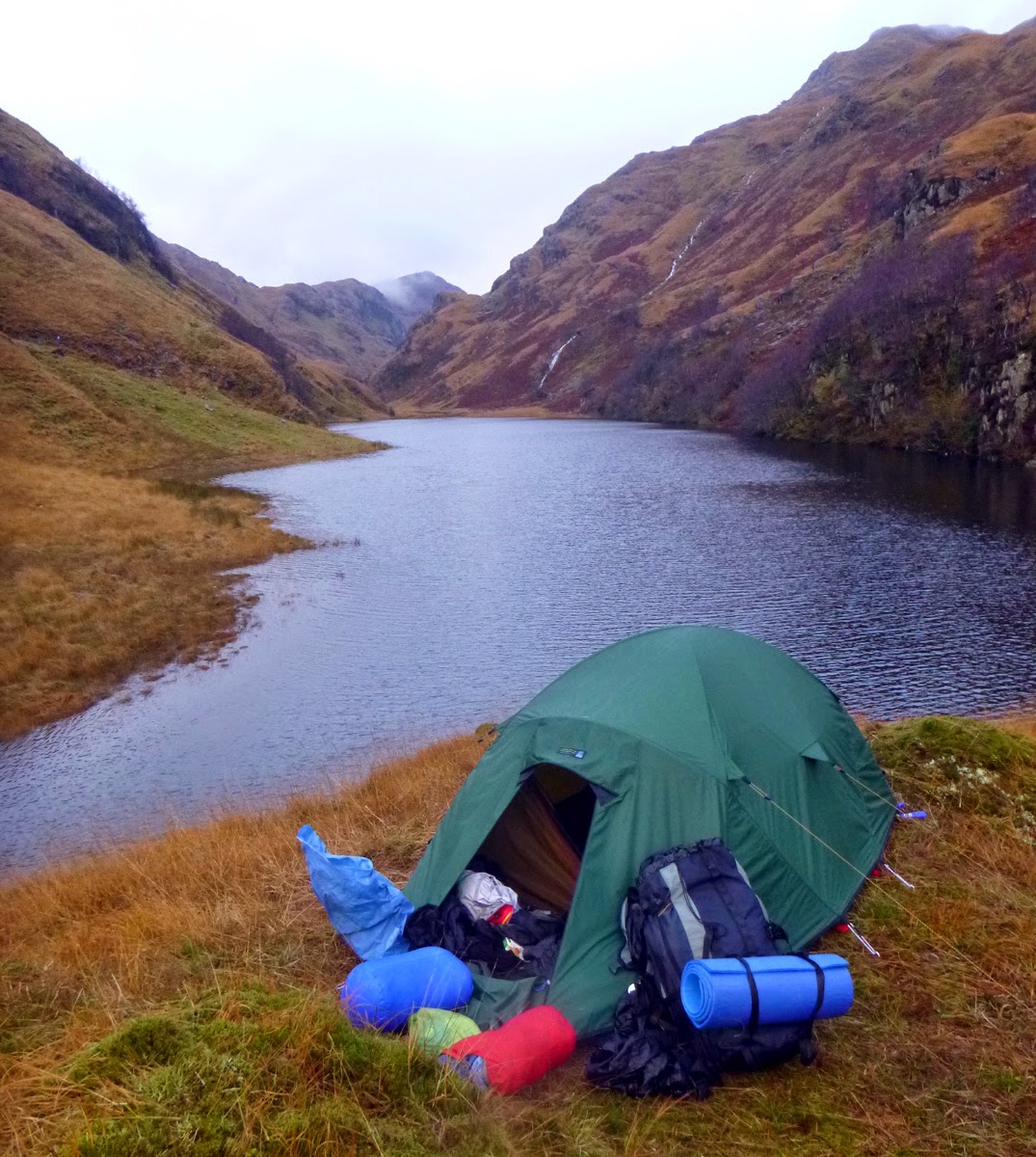 It's been a long time since I was in Knoydart. Known as Britain's last wilderness, it's a magnificent place of rugged steep mountains, deep glens and deer. Not only is it a tough place to explore but getting there in the first place is hard enough. We went along Loch Arkaig to Strathan which takes half an hour to drive along the windy, bumpy road by the loch before you start walking anywhere. 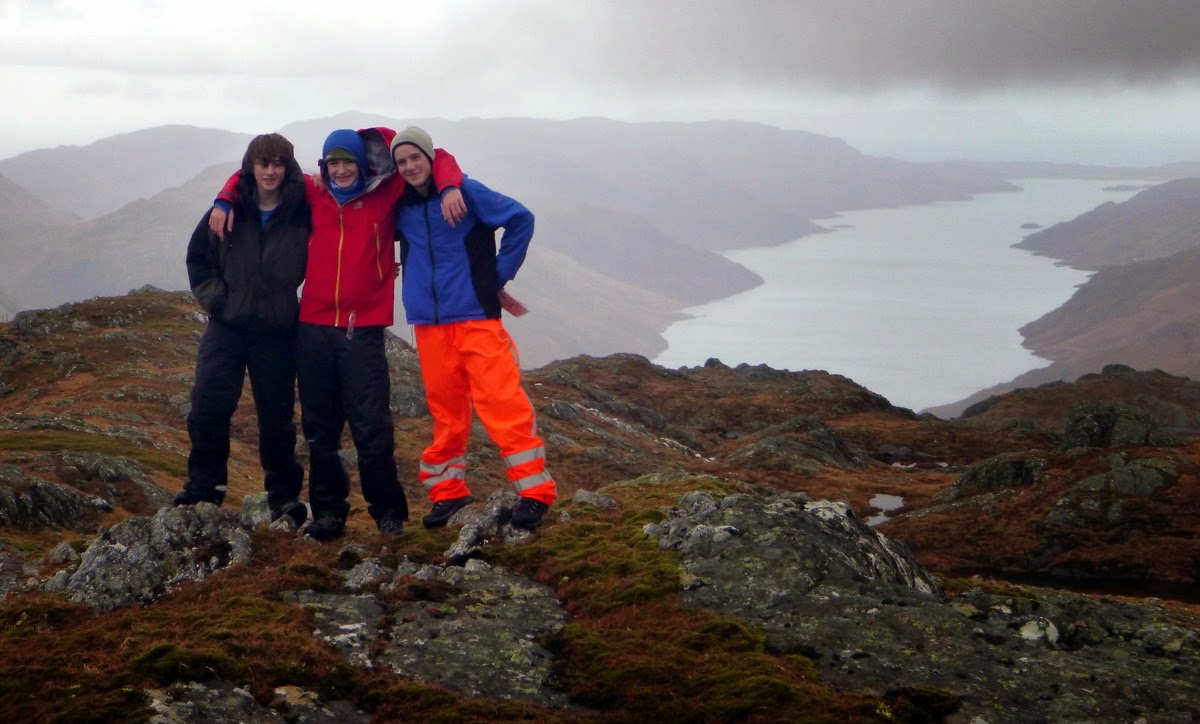 With very heavy rain forecast for two days we had to plan carefully to avoid any stream crossings. We went up Glen Pean first and camped at the loch which completely fills the bed of the glen. There are not many lochs like this which cause problems getting through a major glen. Yesterday we went up 700m of ascent in two kilometres distance, a steep climb by any standards. The view from Carn Mor along the length of Loch Morar was worth every step. 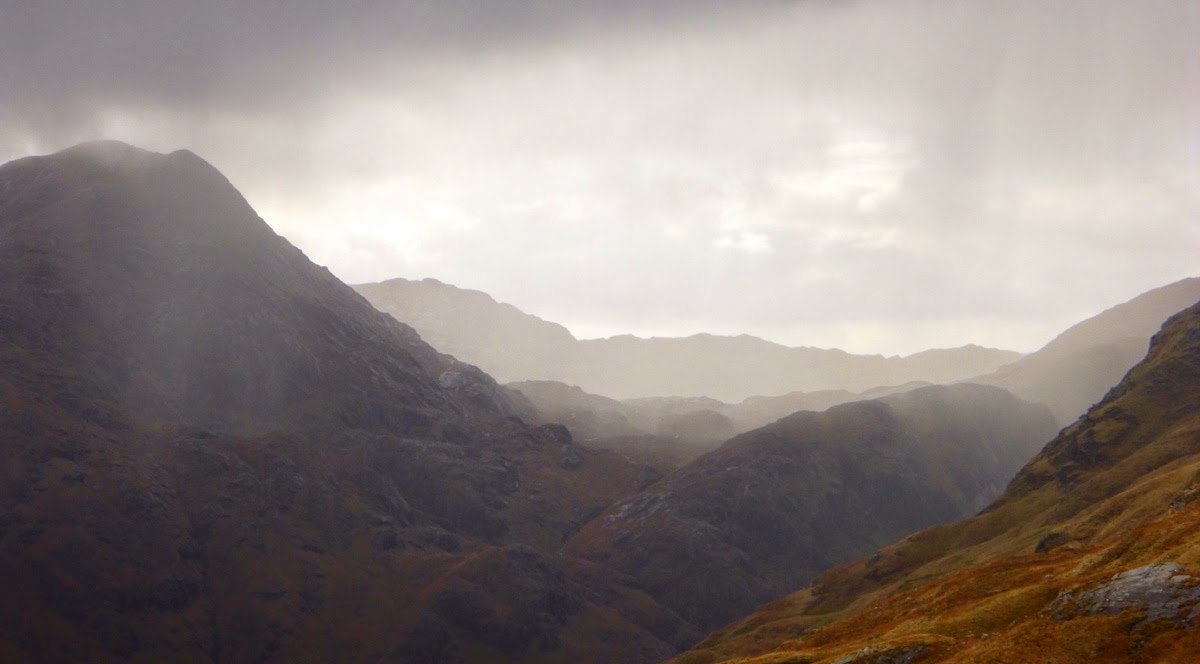 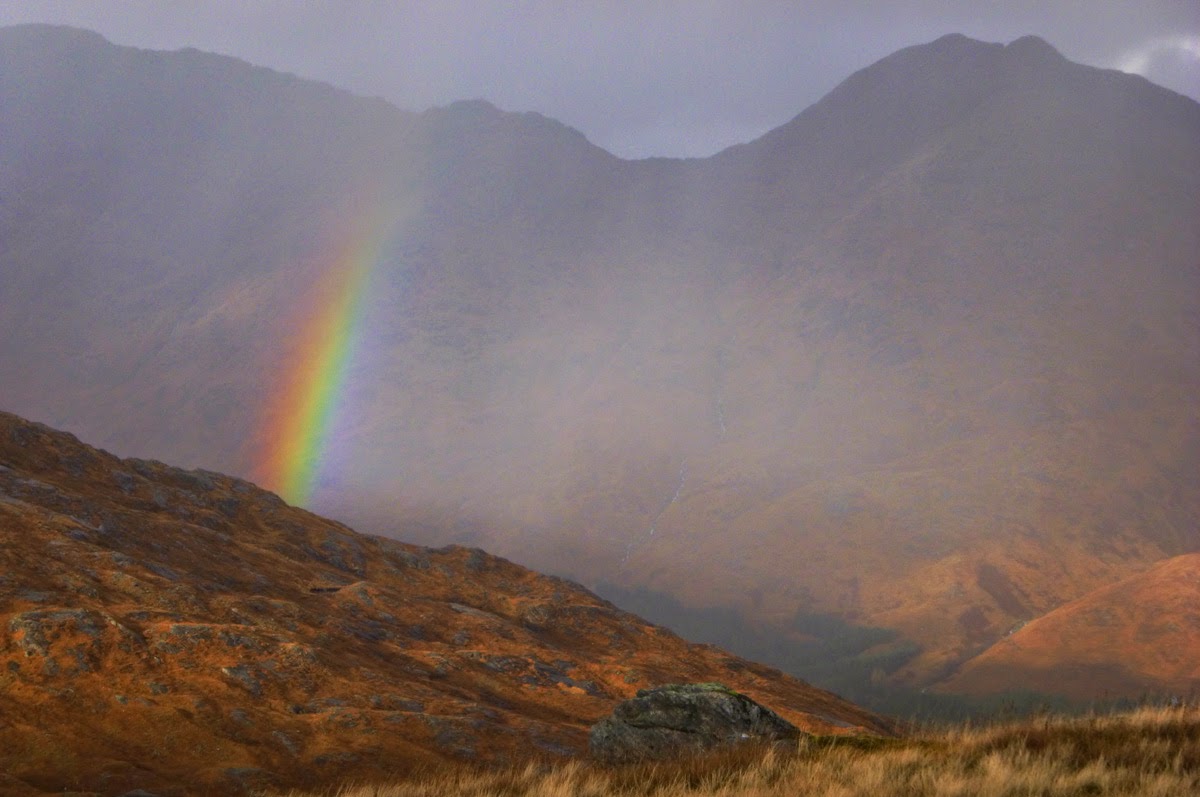 With more rain on the way we went down to A'Chuil Bothy for a drier night. There are several bothies in Knoydart which are mostly excellent and we owe much to the Mountain Bothies Association for their upkeep. Please use them and look after them. 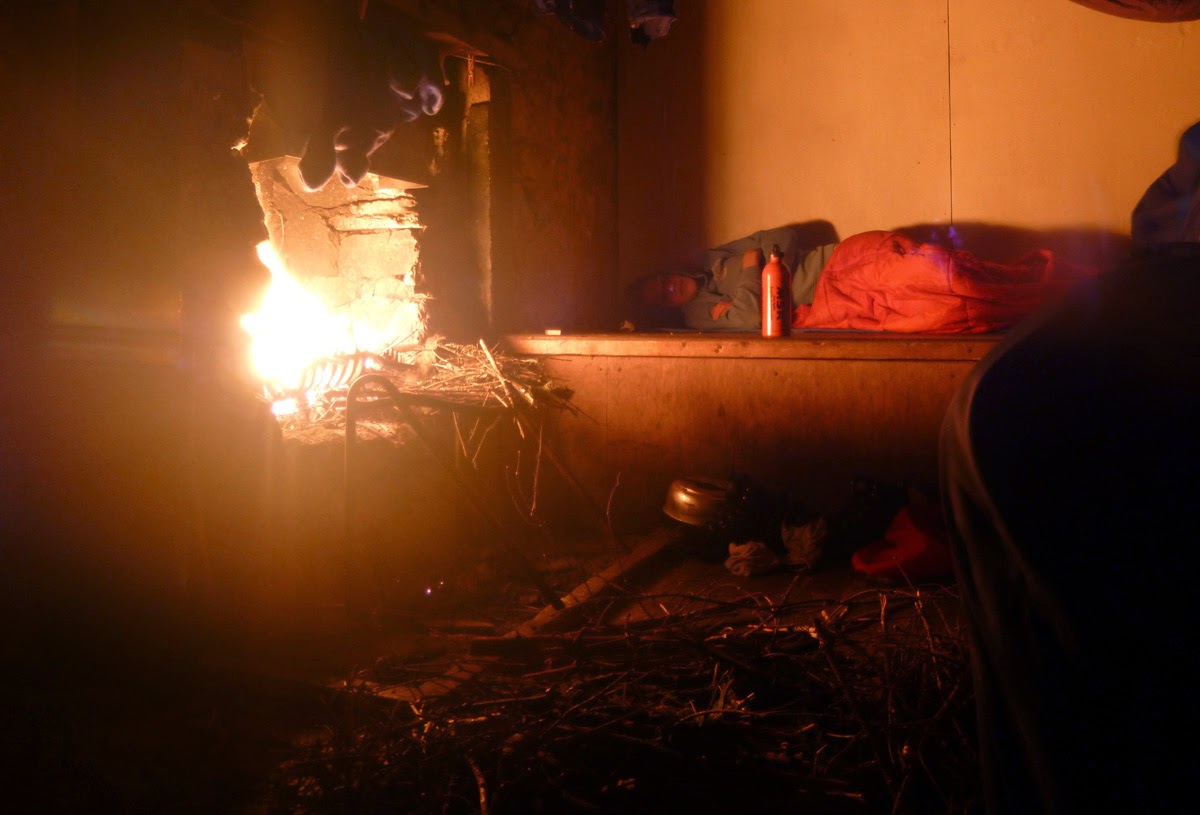 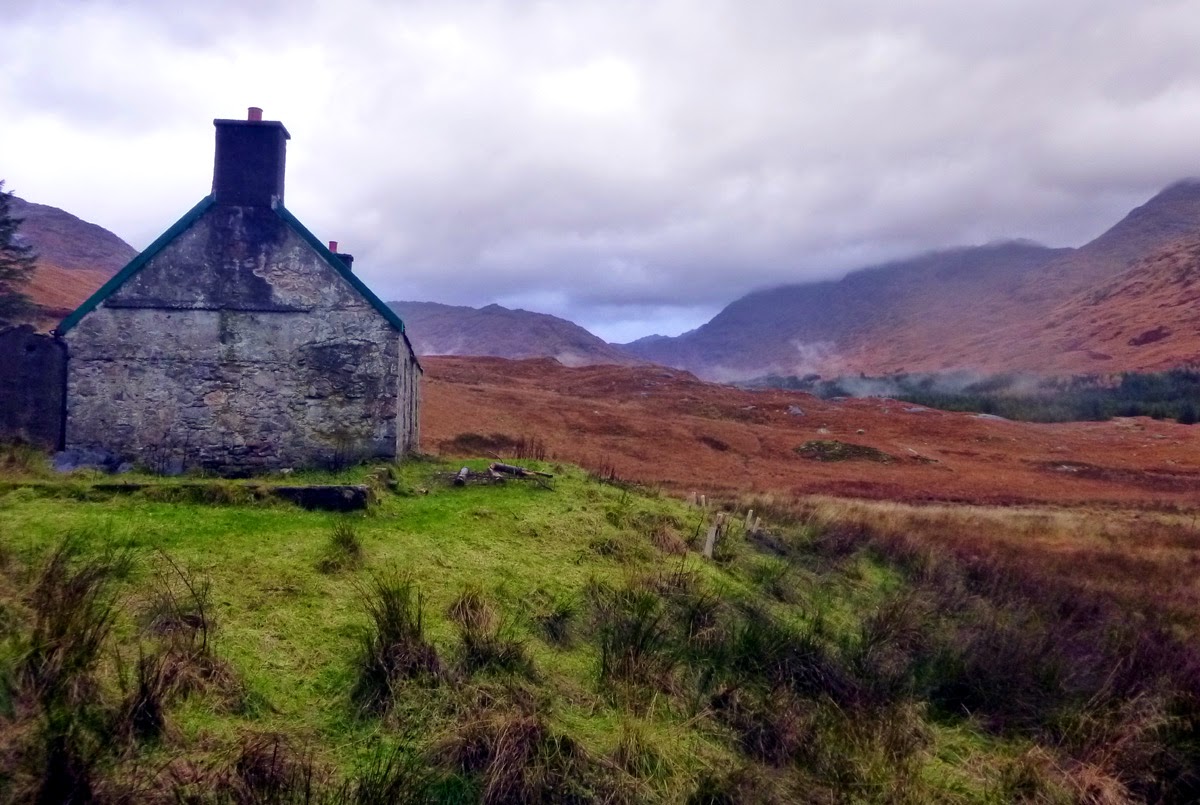 Today was the last of the three day trip so we went up Glen Dessarry a way before heading back down the glen to the van at Strathan. With no one around but the deer (and there were plenty of them) you get a sense of the huge scale of the place and the rugged nature of the land. Three hundred years ago people lived in these glens in black houses with no goretex, mountaineering boots, gas stoves or smartphones. It's remarkable to consider what life was like for these crofters and just how tough an existence they had to endure. Three days of walking here in November was tough enough. Well done to Chris, Calvin and Ruairidh studying on the Advanced Certificate in Outdoor Leadership course at West Highland College. 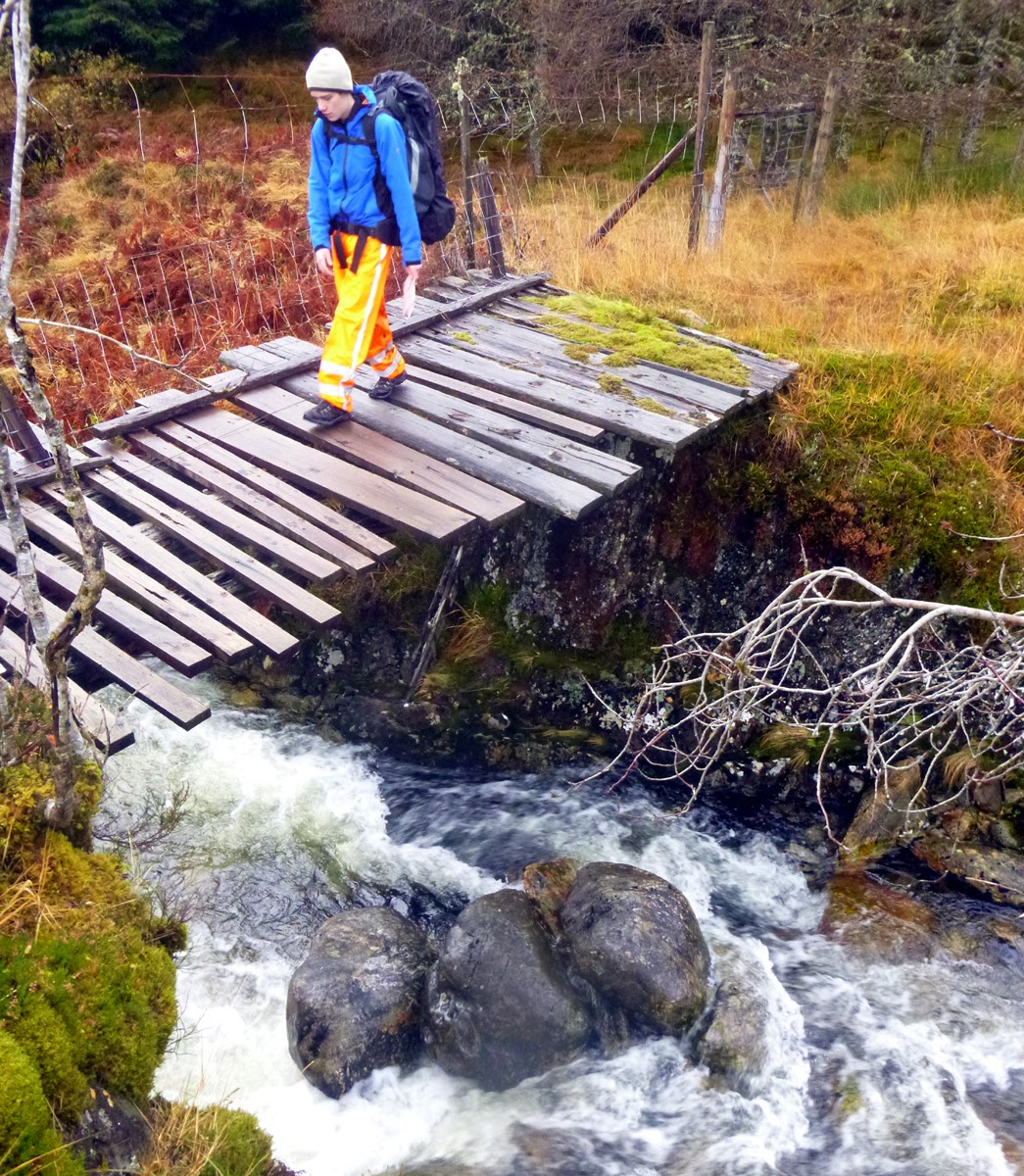 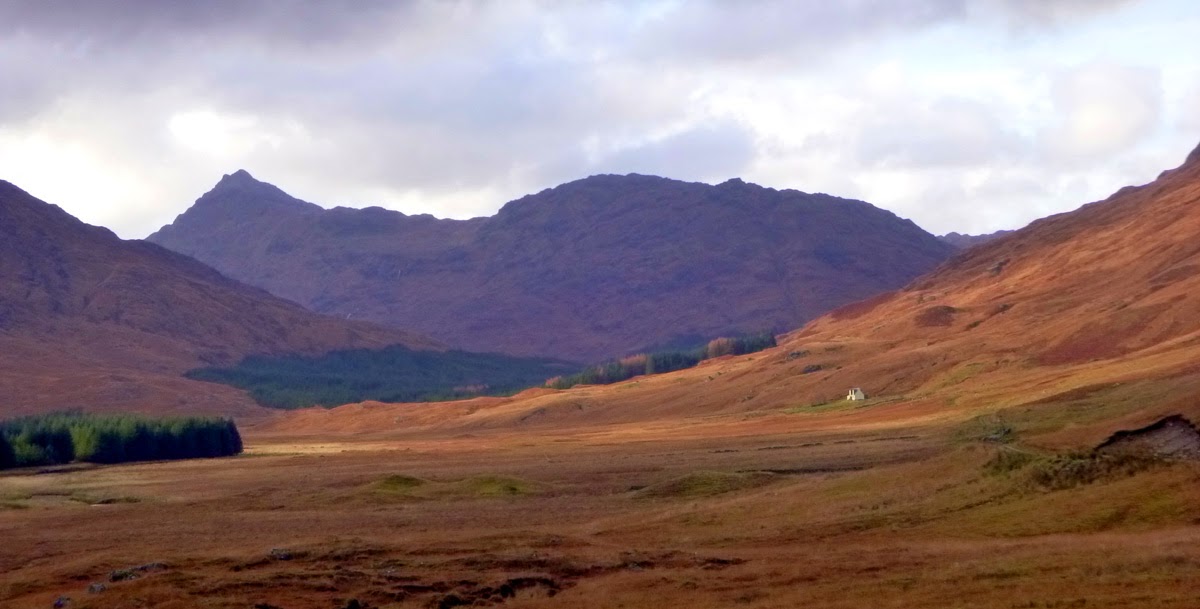 It is always interesting trying to remember what snow fall came and when it fell in previous Autumns. I remember warm dry Novembers, bitter cold Decembers, winter climbing in early October, no snow to speak of at all until February. It is always very variable but we still try to make predictions about the winter from what happens now. These pictures are from last Autumn. The one above and one below are from November 18th or so and the picture of Number Four Gully at the bottom is from December. Do they show any hint of the stunning volume of snow that fell in the winter? 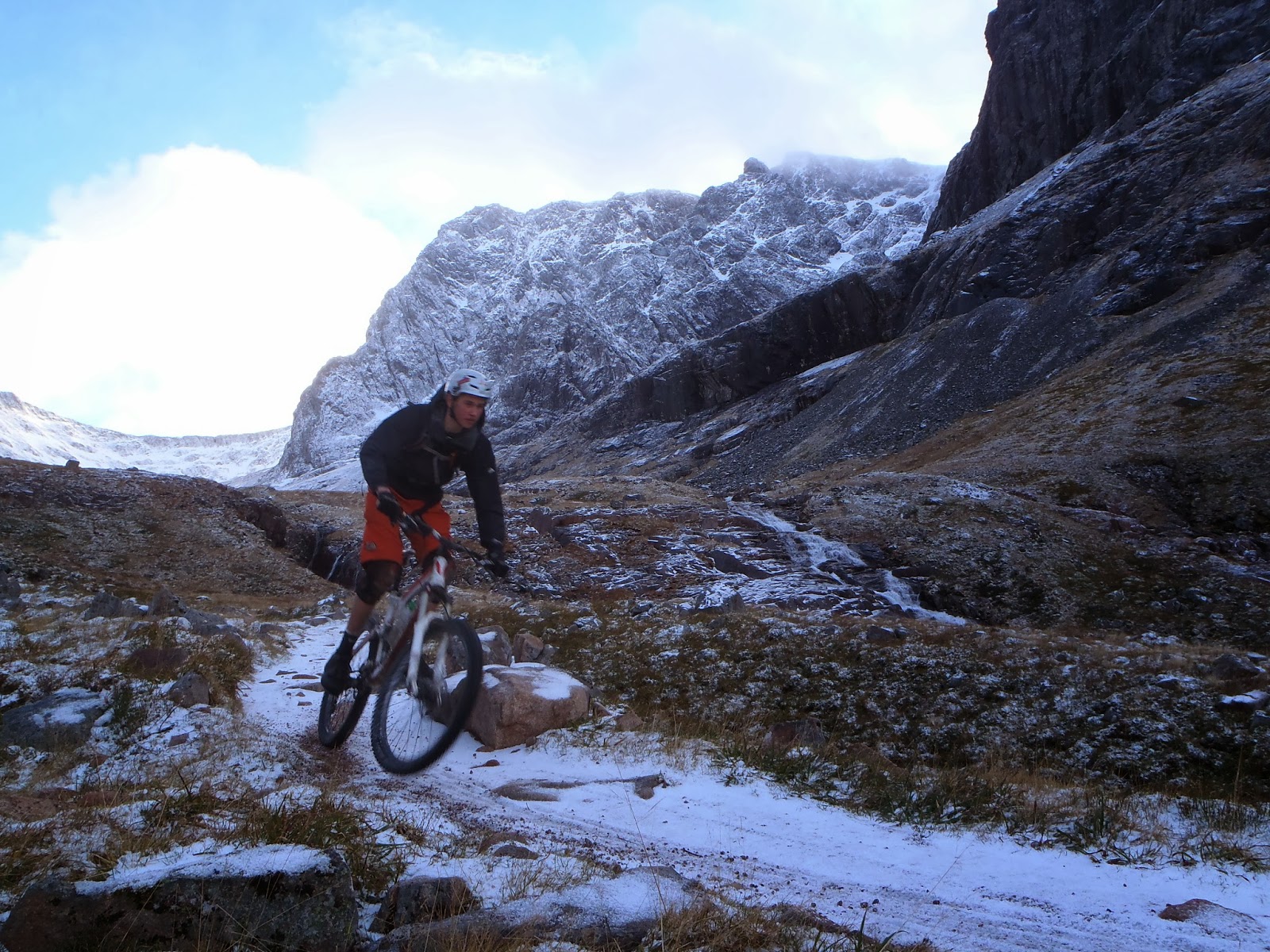 Today we had a decent bit of snow falling on the hills above 900m and tomorrow will be cold again. Temperatures on the hills will be below freezing for a couple of days to come in fact. Will the ground cool down enough before the snow comes? Will the snow insulate the ground before it has frozen properly? Will there be enough water in the drainage lines to form ice? These are some of the factors that go towards the making of a good winter along with the weather we get during the winter. Winter climbing is a great guessing game but don't waste too much time trying to work it out. Give it your best guess and get stuck in! You'll always have an adventure. 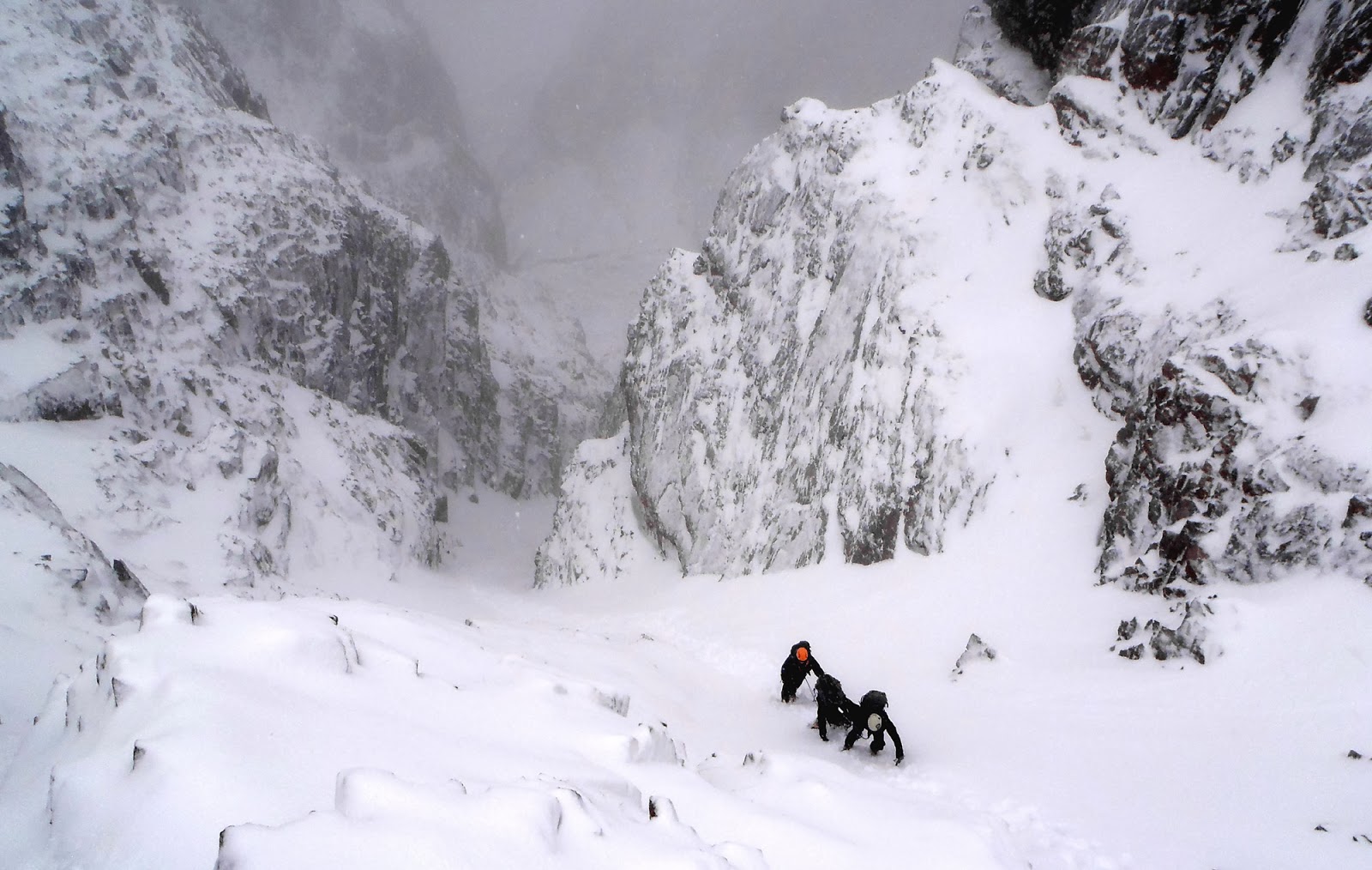