Heavy rain and strong SE winds turned Scott and Andrew back from the start of Curved Ridge this morning. It was thawing to the summit of Buachaille Etive Mor and the guys were already wet through so the suffering/reward balance tipped too far the wrong way and they headed back home. Had they stuck with it (for several hours) they would have had a pleasant walk back down from the summit in clearing weather and colder temperatures.

After two slightly warmer days it cooled again slightly during today to stabilise the old snow quite well. The back coires of Nevis Range would not have been fun to ski as the SE wind blew the fresh snow off the old crusty snow. The best skiing I had was on the Nid Ridge which had already filled in with quite a bit of fresh snow.

It was a rare glimpse of sunshine - it looks like we'll be back to stormy weather again for another wee while but there might well be the chance of some good climbing if you are in the right place at the right time. The crags are certainly very snowy and icy. 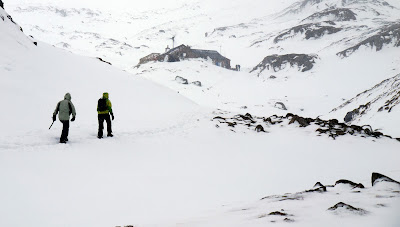 Over the last week we've had an amazing fall of snow. At sea level it's been good weather to stay indoors for the festive feast; heavy rain, strong wind and rapidly changing temperatures. For much of the time snow has been accumulating in gullies and on slopes sheltered from the strong SW wind. Now, we have very deep snow in many places above 700m. I went to Coire na Ciste with Louise and Wendy for a wee look. 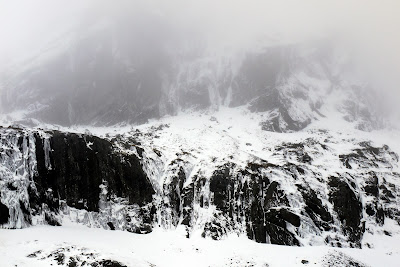 Ice has been forming quite quickly. The Shroud has a respectable size icicle hanging down the crux overhanging wall, Gemini is shaping up as is Mega Route X and even The Shield Direct is looking a bit icy. However I think much of this ice will not be much fun to climb. With so much snow blowing around and without very cold temperatures I think it might be quite soft ice. Certainly the thaw yesterday seems to have affected the ice I could see quite a lot which makes me think it is not solid water ice. However, I did not get to any of it to climb. The Orion and Minus Faces are plastered as well as the face under the First Platform. I don't think it will be much fun climbing anything up there yet though.

Up in the coires I could not see anything, it all looks very white though. There is avalanche debris under the Castle Gullies that came right down towards the path from the half way lochain. There is also avalanche debris under Number Five Gully down into the bottom part of the coire. This is not surprising with the volume of snow we've had and the changing temperatures. The weather is not set to change much in the next week so we should all expect some very difficult conditions for a while yet. Buttresses and ridges are a good idea for the next wee while. 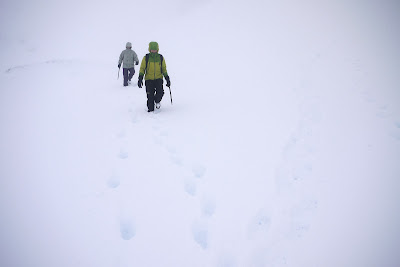 Still stormbound, watching the snow build up in sheltered gullies and slopes, and ice form on the big faces. 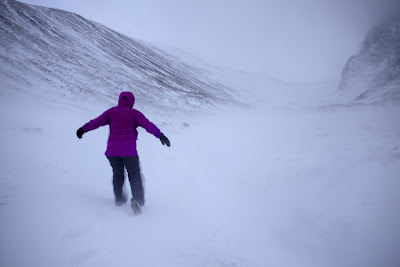 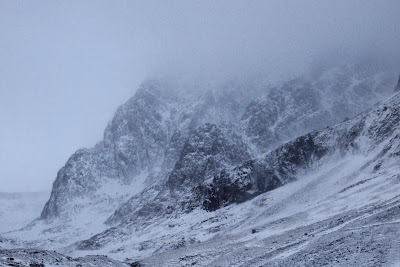 Lots and lots of snow has been falling on the hills over the last few days. We've also had continuous strong SW winds so the snow has been blown into gullies and sheltered slopes. Yesterday the temperature rose and the snow turned to rain at all levels triggering avalanches as it did so. Rain and higher temperatures made the snow wet so it will freeze and stabilise tomorrow when the temperature drops again.

This kind of stormy weather with lots of snow, wind to pack it in to gullies and wash it down faces, and rapidly fluctuating temperatures, is great for building ice on Ben Nevis. Have a look at the SAIS Blog for pictures of the avalanche debris and how the ice is forming in Coire na Ciste. The Cascade and White Line areas are starting to look good already.

The current run of stormy weather is only likely to change on Christmas Day as the high pressure over Europe fills and slides off to the south. This means we have a few more days of ice building weather to come along with the challenging conditions for climbing. Let's hope for lots of ice and calmer weather after Christmas. Now that would be a nice present from Santa!
No comments: 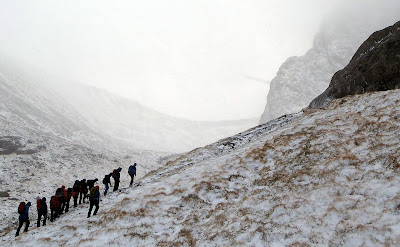 At last we were able to get up a hill with our group from Welbeck College. Ben Nevis looked a bit mean when we walked in but there was fresh snow above 500m from heavy showers last night. More showers kept coming in for much of the day but it was cold enough that the snow just bounced off us once we were above the level of the CIC Hut. 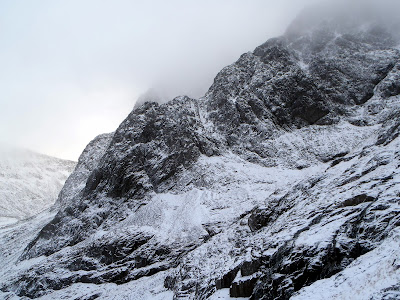 There is a little old snow left in the big gullies above 1000m. We went up Number Four Gully and followed thin strips of old snow from the lochans skirting the base of the crags up to the mouth of the gully . There was lots of groupel and fresh loose snow but once we were in the gully there was less soft snow and it was a bit easier to climb. 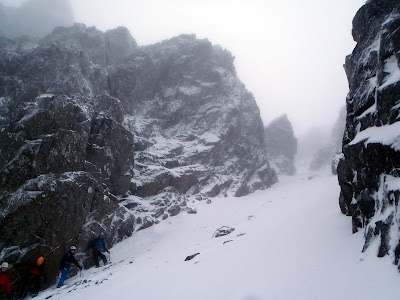 The crags look quite white but just with the fresh snow; they were not well rimed up so the steeper routes were not looking so good. The rocks also need another day or two to freeze properly again after the thaw. Ice is starting to form and it won't be long before everything freezes up well again. 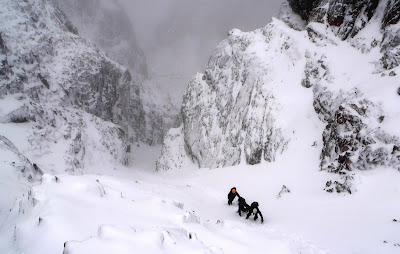 The big gullies are complete but not very full of snow at the moment. However with a good amount of snow fall forecast over the coming week with very strong wind from the south west I think snow will build up quite quickly. It's going to be quite challenging conditions though with lots of fresh snow, strong wind and short days so plan your route carefully. 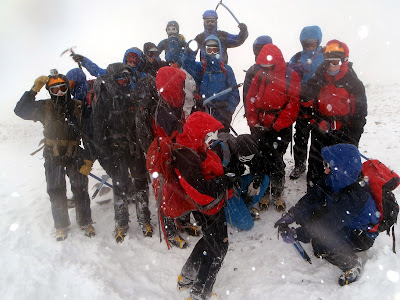 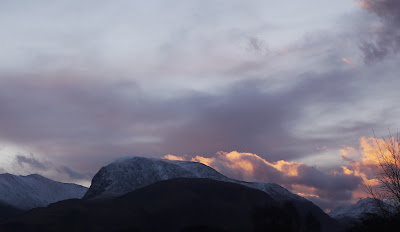 After a week of thaw we had the first sign of slightly cooler conditions coming back this morning. The west coast hills had a dusting of snow down to 800m and a bright morning made them look much more wintry. Unfortunately another deep low pressure system battered Scotland during the day with gale force wind and heavy rain that melted the snow as quickly as it had fallen. Our team from Welbeck Defence Sixth Form College endured a similar day yesterday at Kingussie Crag - today we made the most of a dry morning at Onich Slab before heading indoors to The Ice Factor. Currently the only ice climbing in Scotland is indoors but this might change over the coming week. The temperature is forecast to be more like what it should be at this time of year with the tops below freezing between short periods of thaw. The wind is forecast to remain very strong though right through to Christmas so don't expect easy conditions in the hills for quite a while yet. 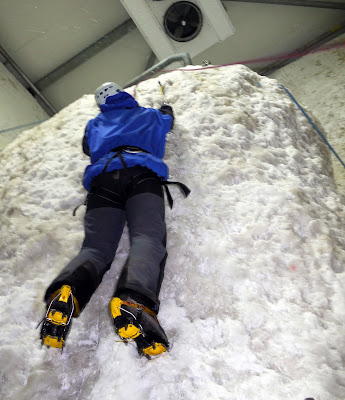 Last Saturday there was snow down to the road side on the way to Aviemore. Since then we've had a sustained thaw with plenty of rain so lots of the snow melted away and is now in the sea. I took a wee spin up the Allt a'Mhuilinn to the CIC Hut to check out what is left behind. It's a little depressing looking from the hut but from the foot of Number Five Gully and the lochans in Coire na Ciste there is quite a consistent cover of snow and the big gullies are still complete. Of course there is no ice left on the crags and in fact there has been plenty of rock fall. Looks like it will be warm all this week and staying windy too.
No comments:

A little snow fell down to sea level last night and today was a cold, bright day. Thankfully the wind dropped away quickly after the storm yesterday and it was quite calm. Some crags on Ben Nevis were rimed up and Kenny and Guy climbed Sorcerer, a great looking route on Creag Coire na Ciste with a crack pitch much like the Magic Crack in Coire an t'Sneachda. Ice has been forming quickly in the cold snap with plenty of water in the ground to seep out of the cracks and down drainage lines. Stob Coire nan Lochan was not so well frozen or rimed up but after tomorrow nothing will be as warm and wet weather moves in. 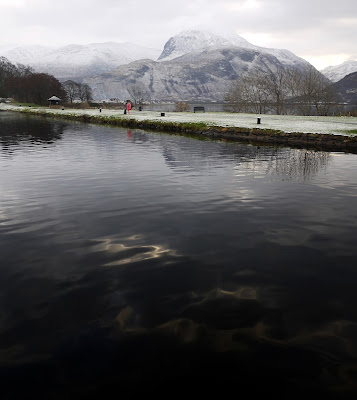 Yesterday I went up into Coire na Ciste on Ben Nevis. I did not take any pictures since the inside of a cloud is not very interesting and it was wet and windy. The snow cover was surprisingly good though. From just below the lochans up to the top there is quite a reasonable cover of firm, transformed snow. The big easy gullies are complete and there are melted-back lines of snow under the crags and in the hollows and shallow scoops.

Today is much colder and we've had heavy showers of snow down to 500m. Tomorrow will be a very stormy day with winds gusting at 120mph from the NW and the temperature will drop even more. It's forecast to be -7C at 900m and even colder on Ben Nevis summit. It will stay much the same on Friday so by the weekend the crags will be well rimed up again and frozen hard.

I thought last weekend would turn out to be a good climbing weekend but it did not work out so well. Perhaps we'll have better luck this weekend.
No comments: