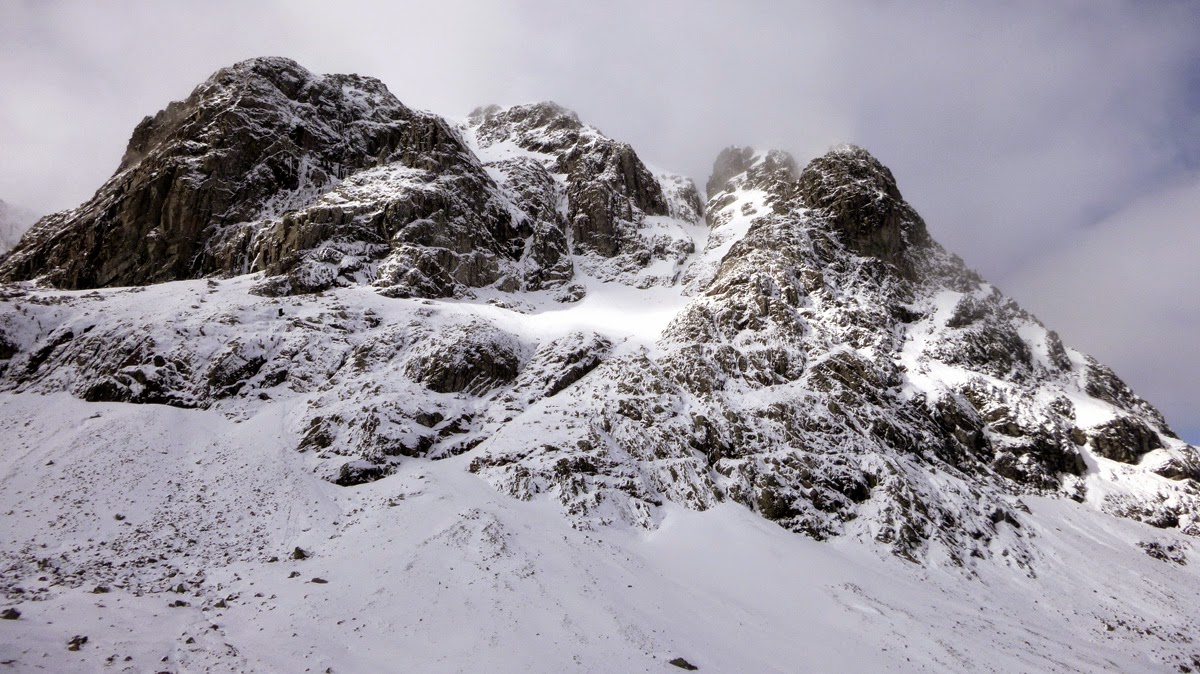 In the centre of the depression (the eye of the storm) we had light winds and just a few showers and broken clouds drifting around Ben Nevis. In fact it was all sunshine and blue sky as Mike and I walked up towards Castle Ridge. In the last few weeks, Mike and I have climbed Crowberry Gully, Vanishing Gully and Number Two Gully Buttress as well as Castle Ridge today. It is reasonable to say we have had more than our fair share of sunshine on these days. 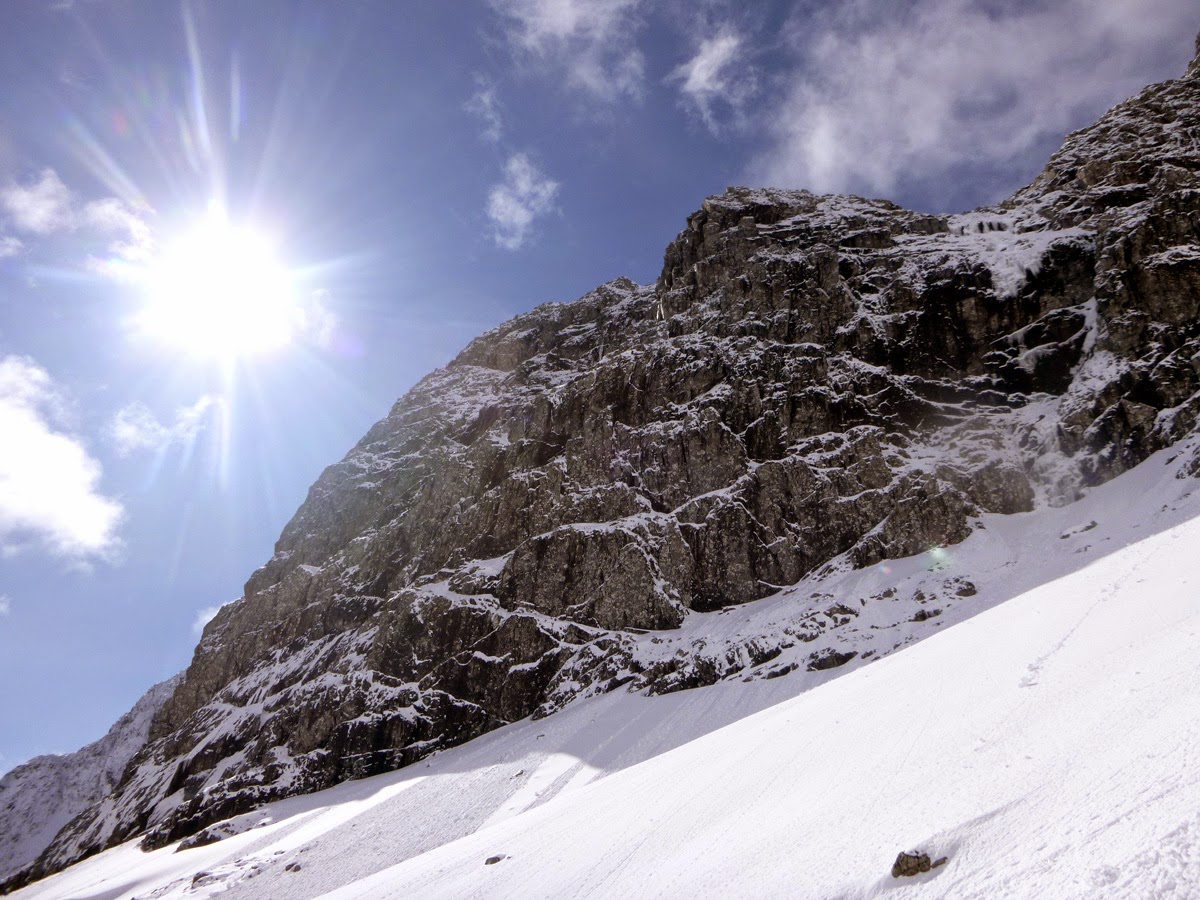 As it is now late April there is a lot of heat in the sunshine and it got to work on the fresh soft snow straight away. As we walked up to the foot of the ridge a point release avalanche of wet snow slid slowly down from The Castle. This buttress and the two Castle Gullies on either side have large areas of steep snow and they are well know for threatening the approach to Castle Ridge with avalanches. We were very careful to choose a protected line and got on to the ridge before the heat of the day caused more avalanches. 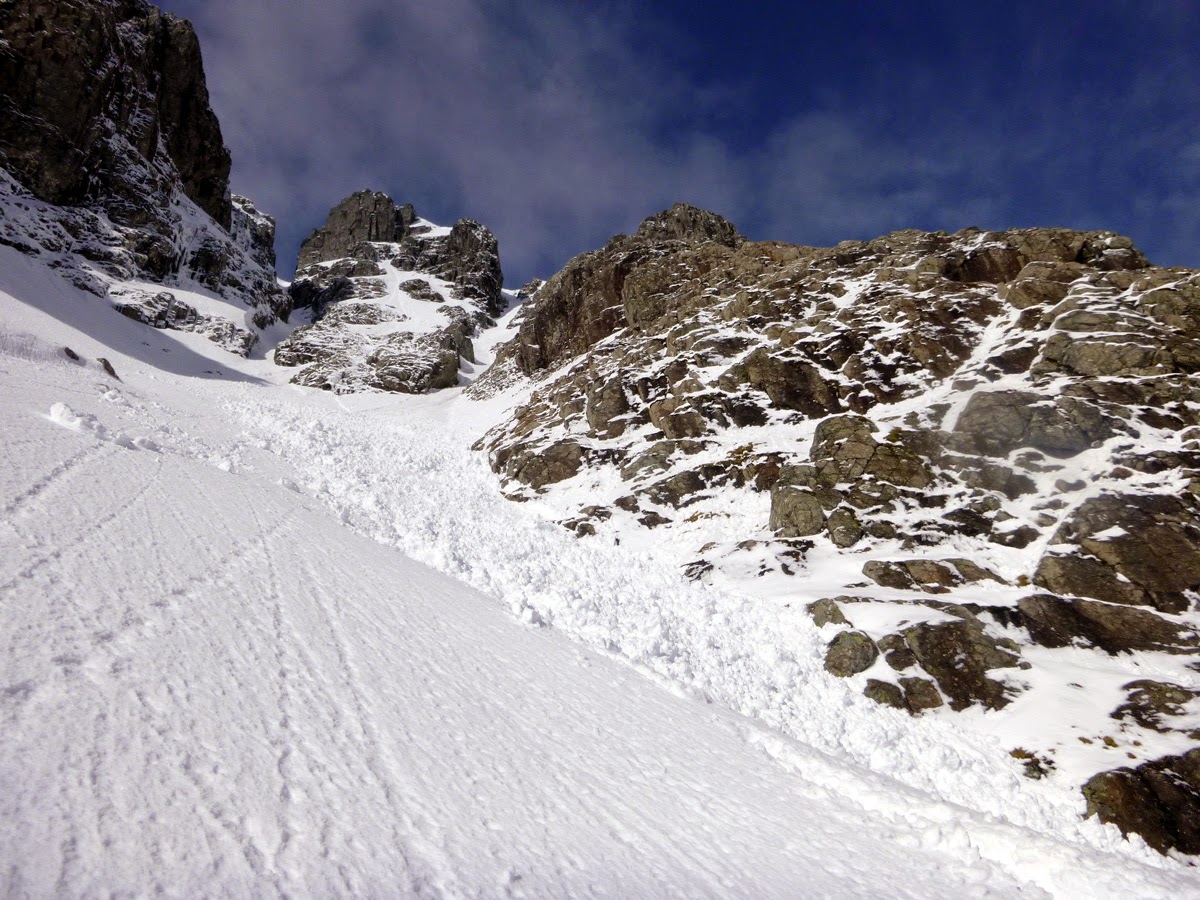 The ridge itself had plenty of soft useless snow and some dry rock sticking out. It was scratchy and awkward but impossible to complain about in the brilliant weather. A few times during the day the temperature dropped by about 10C as a snow shower drifted over but it warmed up again as soon as the sun came out. Castle Ridge is a fabulous climb with a steep and brilliantly exposed crux high up on the ridge. Afterwards there is an excellent narrow crest up to the top, probably the nicest narrow section of ridge on Ben Nevis. The crux was dry rock but there was soft snow and old snow in patches all along the ridge so it felt very Alpine. 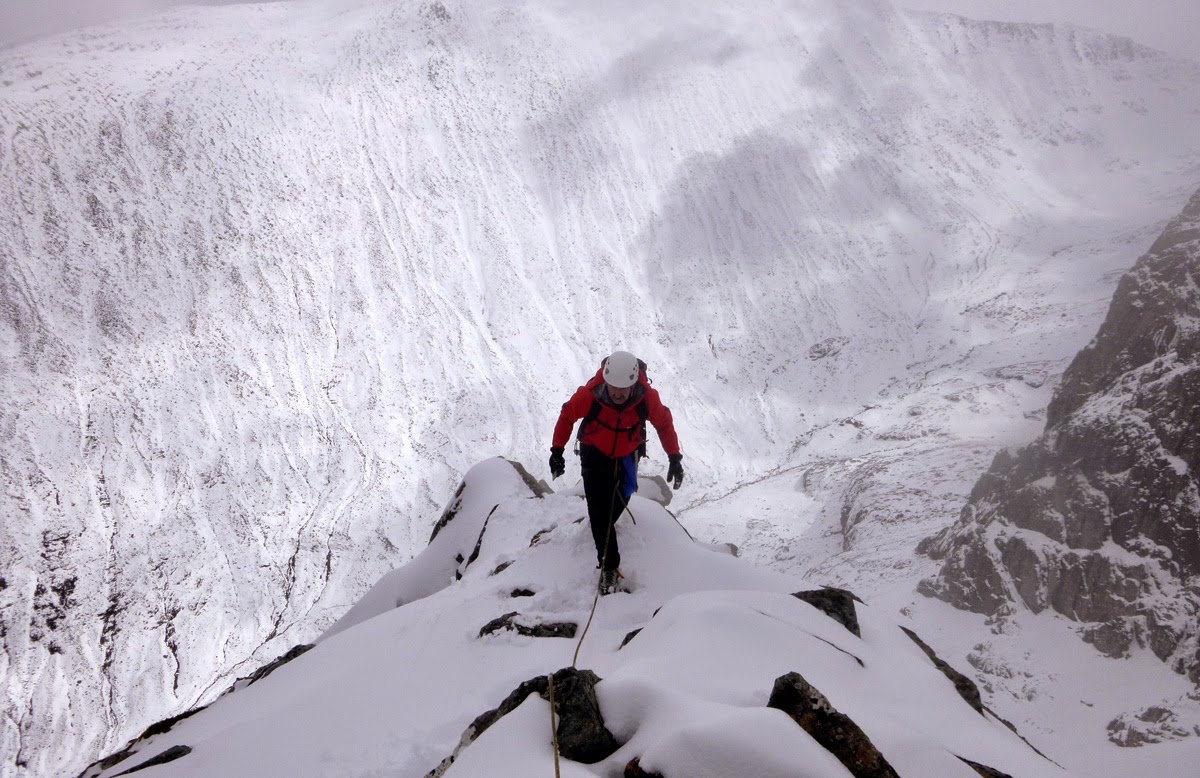 The walk down the boulder slope towards Lochain Meall an t'Suidhe was tedious with soft snow on the rocks but the view of the North Face when we got back to the van was one to remember for a long time. Bright white snow on immense ridges and buttresses reaching up towards the heavens. What a great couple of days I've had in the Outdoor Capital of the UK. 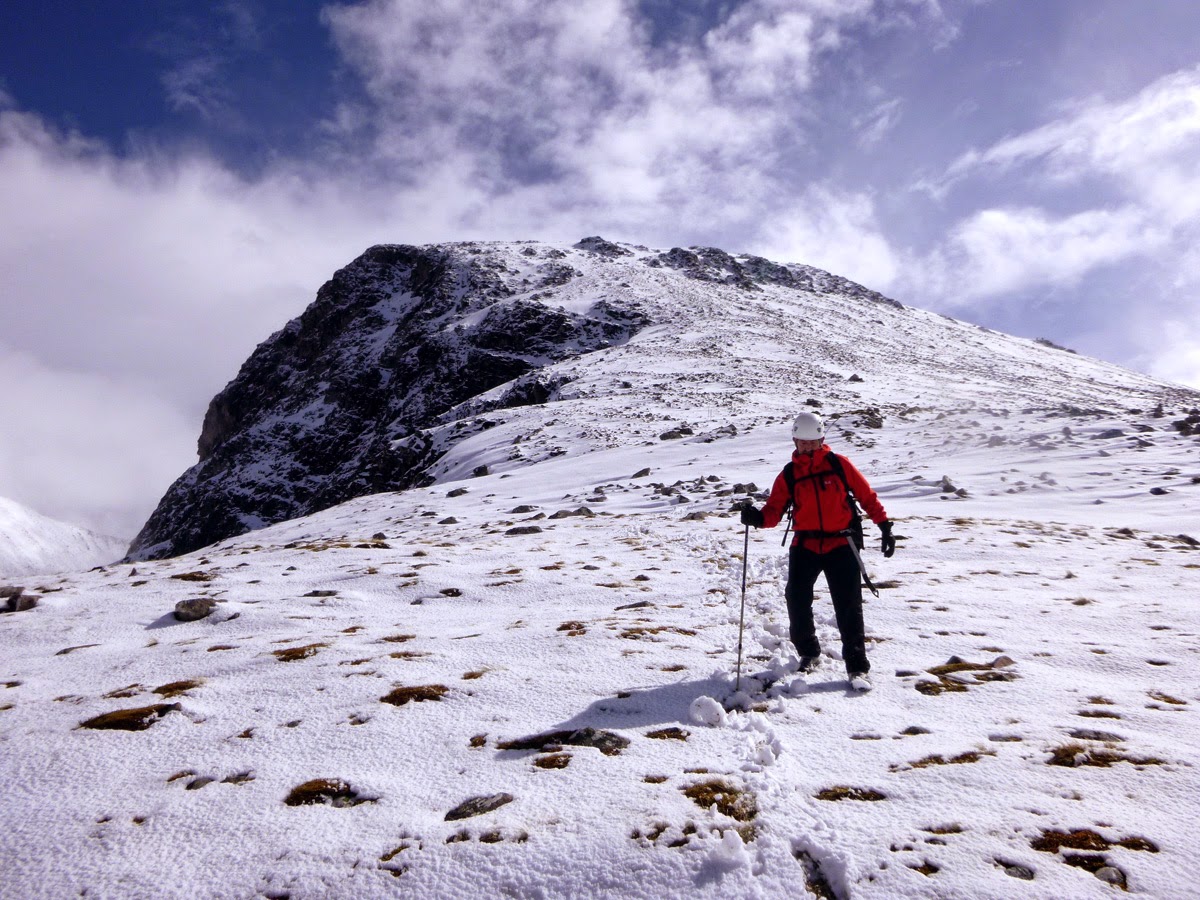 There was debris visible from an avalanche out of Observatory Gully and I would be surprised if there was not avalanche activity in Coire na Ciste as well. The sunshine is making the fresh snow wet and heavy and it is sliding down in slow, wet point release avalanches. These might not look very serious but they will easily engulf you and trap you so stay clear of them. 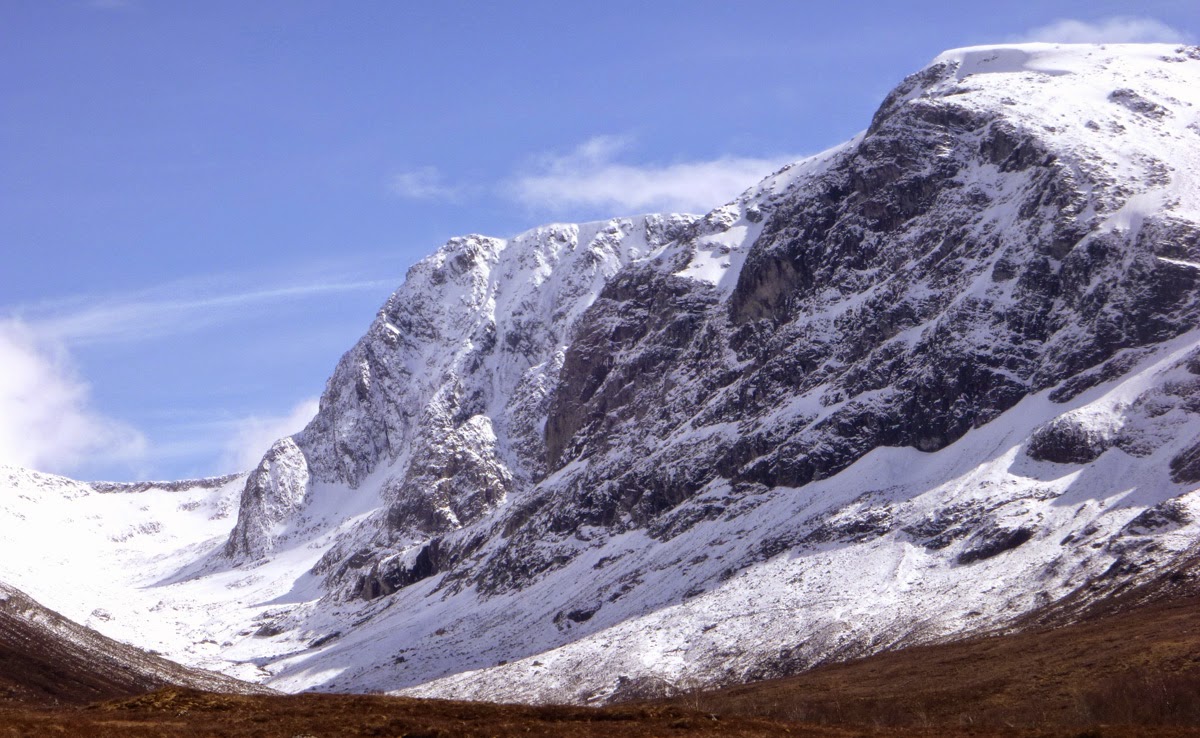