After fresh snow in the Alps it can be a good plan to do a snowy route so John and I decided to traverse Lyskamm, a classic snow crest above Zermatt. No five hour walk in this time, instead a swift cable car ride to nearly 4000m along with many other people. Happily we came out of the valley cloud a couple hundred metres before the top of the lift. Equally happily someone had made an excellent boot trail up Castor, the peak you need to traverse to get to the Quintino Sella Hut. We made it there in good time ready for good Italian cuisine to set us up for the traverse.

Lyskamm has a face of about 1000m on its North side over which the traverse crosses 4km of snow crest with a reputation for cornices and occasional double cornices. The fresh snow of the previous day had been blown along the crest so it was quite variable in depth from knee deep post holes to nothing at all.


Normally, a stay at the Margherita Hut at 4554m involves sitting around feeling ill before going to bed as early as possible. This time we were treated to the most extraordinary meal I have ever had in an alpine hut; fresh broccoli soup with tomato and courgette penne pasta to start, fresh tomato and basil salad and roast pork for the main course and melon and pineapple with tasty chocolate treats for afters. The chef received a round of applause and photos were taken. The only bad thing about the meal was there was so much of it we could finish it all (a rare thing when I am around). 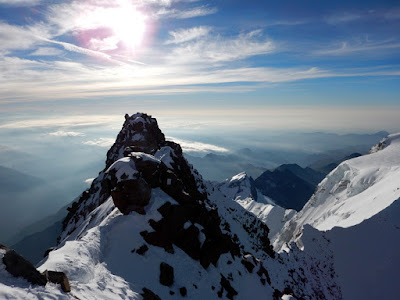 The ridge connecting Zumsteinspitze to Dufourspitze has the East Face of Monterosa dropping away 2500m from your feet. It is the biggest face in the Alps and the sunrise bathes it in a warm orange glow. The climb only takes a couple of hours since the starting point is so high but then you have a very long walk down to Zermatt past the shiny new hut.