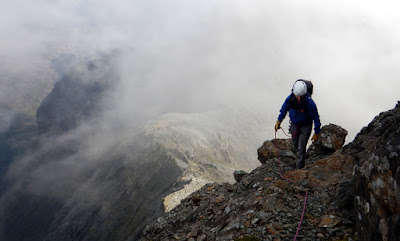 At long last we've had some success on Skye. The high pressure system over Europe has brought brilliant early Autumn weather to most places. Yesterday we had some cloud and strong wind on the southern half of the Cuillin Ridge but with the forecast for the wind to drop and the clouds to clear Will and I hoped for the best. 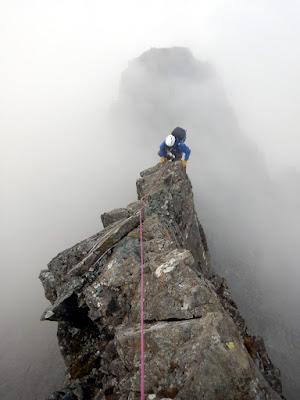 We climbed the first three Munros in the cloud and caught very brief glimpses of the view. The rocks were wet in the morning so we by-passed the TD Gap but climbed Kings Chimney to Sgurr Mhic Choinnich which was still quite slimy. On Inaccessible Pinnacle it felt like we climbed out of the cloud and we saw the first sign of blue sky. 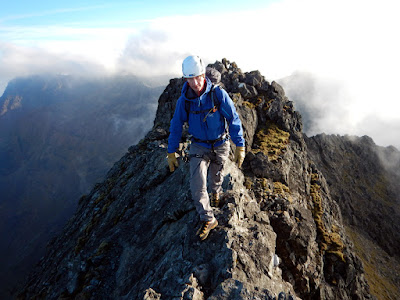 Having made good progress we carried on over Sgurr a'Greadaidh in the warm glow of the setting sun. Deep shadows and warm colours are a wonderful feature of a September traverse. There was even some water available at An Dorus for the overnight stay and set us up well for the second day. Compared with June, the nights are long at the moment so we got a good long rest too. 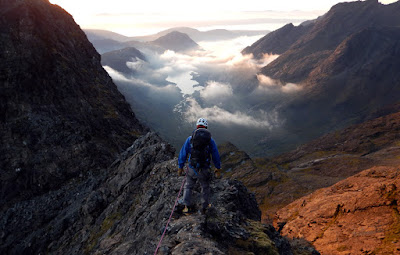 This morning dawned beautifully and with a temperature inversion we were warm up on the crest of the ridge. A few clouds in the glens made the scale of the mountains seem even bigger. Dry rock and just a light breeze made perfect conditions for the second half of the traverse which we did in great time. 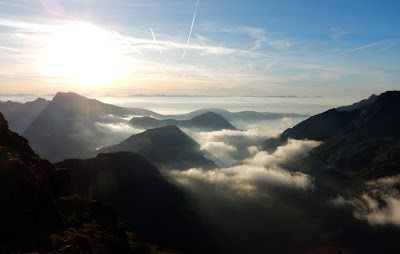 Naismith's Route was a real highlight near the end too. Will has done lots of scrambling and mountaineering as well as a lot of training so it's no surprise he did so well on the traverse. I'm so glad we got some of the most spectacular views I've seen of the Cuillin as well. 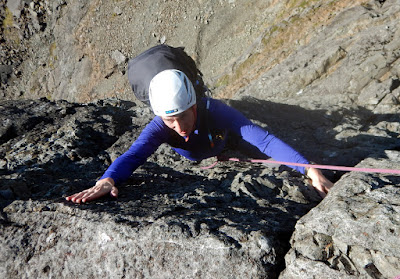