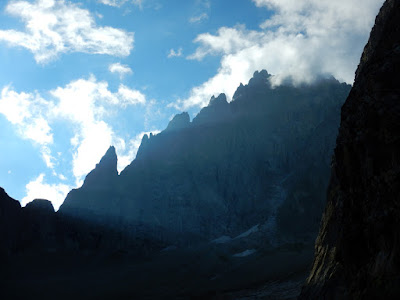 After a week and a half of climbing in Switzerland and being very well acclimatised after a night spent at the Margherita Hut at 4554m, John and I were ready for a suitable finale to our trip to the Alps. The weather forecast was good, we were fit and a friend of mine had just climbed the Aiguille Noire de Peutery South Ridge. This is a route that John and I had talked about in the past and we had climbed the Innominata Integral a few years ago and enjoyed this part of Mont Blanc. So, that was it, decision made. We would give it a go. 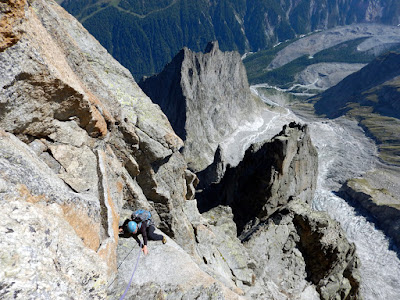 The South Ridge is an enormous undertaking. Think about climbing Ben Nevis from sea level on a continuously steep and narrow VS granite ridge in a very impressive position and you will not be far wrong. It has a simple approach of one hour across a boulder and scree field, tricky climbing right from the start and a descent of about six hours down the loose East Ridge with many abseils. Most people will take one long day to reach the summit and then need to spend the night somewhere before descending the next day. So there are many logistical questions to answer - what shoes do you wear, what ropes do you use, is there snow for water on the route and is it worth taking a stove, how cold will it be, how much food do you take? The more kit you carry, the slower and harder work it will be. You might also go super light and try to get up and down in one very long day. This was the tactic that Tim and Max used, two British guys who turned up at the bivi hut to climb the route as well. Having climbed the West Ridge of Salbit last year we thought they would stand a good chance of doing it but we were sure we'd want to savour the climb a little longer and spend the night near the summit. 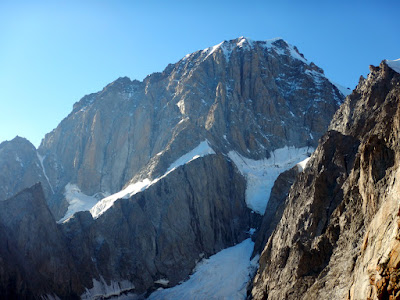 Even getting to the bivi hut to start the route from is an impressive undertaking. From the car park in Peutery the hanging valley seems impregnable and it would be if it were not for many ladders and chains in the cliffs below. However, this seems nothing to the very impressive South Ridge that sits above, full of vertical towers and perfect, compact granite. 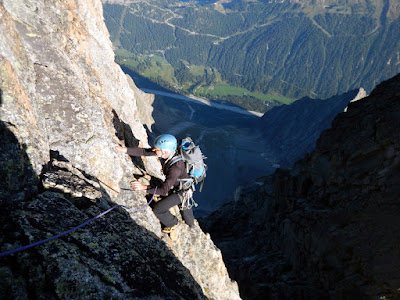 Some people walk up from the valley and start the climb straight away. A bivi is often made on Point Welzenbach doing it this way and the hope is to complete the climb on the second day and descend all the way to the valley. It is possible to do the whole thing in two days like this. However, John and I were in no rush and we decided to get to know the area a bit better which is highly recommended. We took a day to explore the starting pitches of the route and to climb part way up Point Gamba. This has a bolted climb up it from the col to its south which is about UIAA IV and would need two ropes to abseil down. We had just one 60m single rope so we satisfied ourselves with a recce for the the climb the next day. 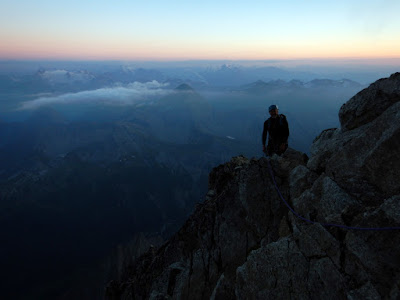 The recce and watching another team climb the route were invaluable to making good progress at the start of the climb. It is not completely obvious where to go until you are well up Point Bifide and established on the crest of the ridge. Even then there was at least one section where none of the guide book descriptions quite seemed to fit the ground we were on. Most of the time the pitches were longer and the distances further than described. It's bigger than you think! We carried on climbing up pitch after pitch of perfect rock, lapping up the exposure and the quality of the climbing. After 14 hours on the go it started to get dark so we were forced to stop and spend the night on the crest of the ridge above the twinkling lights of Courmeyeur. 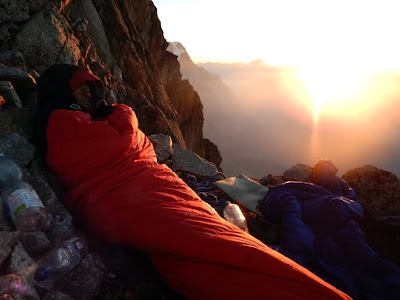 With virtually no snow around we did not take a stove so we drank a mouthful of water (we carried just over 2ltrs each), ate a sandwich and settled down for a good night's sleep. Tim and Max were jealous of our acclimatised snores since this was the first climb of their trip and we were at 3700m. Next morning we knew we could wait for the sun to warm the rock before setting off. In fact it did not freeze over night and we had a very comfortable night. 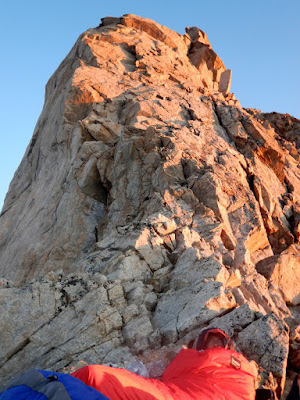 An hour and a half later we were taking selfies next to the Madonna on the summit. What an amazing place with the Brenva and Freney faces of Mont Blanc behind, the view down the length of the Aosta Valley in front and great peaks such as Les Grandes Jorasses to both sides. We soaked it up as long as we could but we knew the descent was long and tiresome so we set off. The best route has changed a bit over the years as more fixed abseil points have been added. Following the cairns is a good idea but there are several lines of cairns to choose from! Either way it will take a good amount of time and rushing is ill advised. It's a long way down! 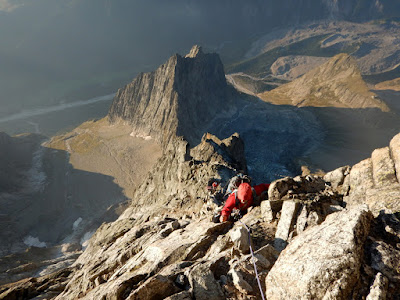 So we got back to the bivi hut late in the afternoon with no energy left for the climb down the ladders to the valley. Max and Tim got there not long before us feeling the same way! Luckily the very friendly group of Italian's who stayed in the hut at the weekend and who made us pasta and coffees also left some polenta. We scraped together what we had with the polenta and Max and Tim's couscous to make a fantastic meal. We had shared the climb with these guys, helped each other out and it was a very nice way to finish the climb and our trip to the Alps with a dinner under one of the Alps' most impressive ridges after having climbed it!

So I can highly recommend taking your time a little in the Alps. On an expedition to a new place you would think nothing of taking a day to recce the area and get a feel for what you are getting yourself into. In the Alps it can be a good idea to do the same, especially if you are taking on one of the longer climbs. In a world where everything is done at fast pace, take a moment to savour just being there in the mountains and let them help you make the best decisions about how to go about climbing them. 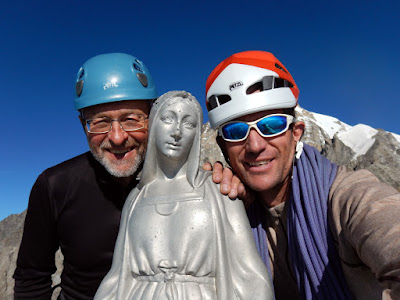