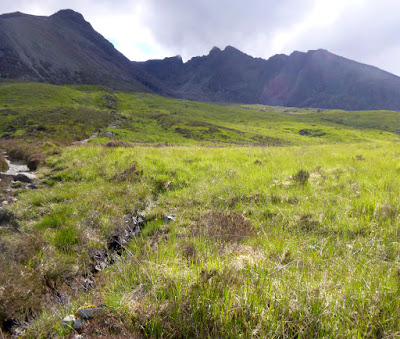 At last it seems like there is some green on the hills. Walking into Coire Laggan on Skye yesterday with Skylarks singing over head, flowers under or feet and green grass up to our knees it felt much more like spring (even though we are now in summer!). Jim, Aileen and I went up to climb Sgurr Mhic Choinnich, a tricky Munro with an involved route and several exposed steps at the head of Coire Laggan. 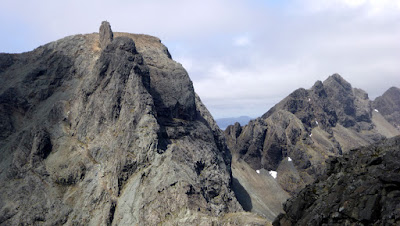 The clouds cleared and the sun cam out briefly to reveal several people out on various routes making the most of the dry weather. There was quite a cold wind though and it was another day for the yak wool shirt from Jottnar. The route up from Rotten Chimney is really quite airy - more exposed than I had given it credit for. I have been up twice this year now and was impressed by the situations both times. As part of the complete ridge traverse it is (just) another very exposed bit, but as a single day it stands out as quite a trip. Aileen and Jim did great and were happy enough without the rope in the dry grippy conditions. 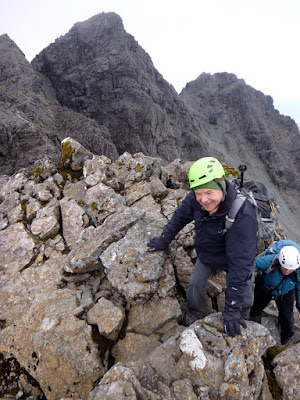 Today we went for Sgurr nan Gillean by its SE Ridge. After so many years of exploring the Cuillin it was a surprise that I'd never been up this way, so it was a treat to go somewhere new. It is a long walk in from Sligachan and unfortunately the mist stayed down on the tops so we were climbing up into the gloom. There was no wind though and the very narrow crest at the top made up for the lack of view. It really is a fine ridge with solid rock making up entire sections of it. 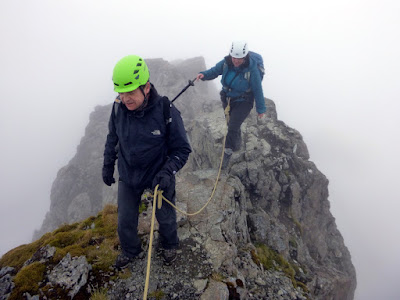 We reversed the route and went all the way back around Coire Riabhach to Sligachan. After completing a traverse I have always descended the W Ridge and gone down Coire a'Basteir and I think this has been a good decision. It's a long way round by the SE Ridge and the path is really quite rough so it would be heavy going with post-traverse legs! 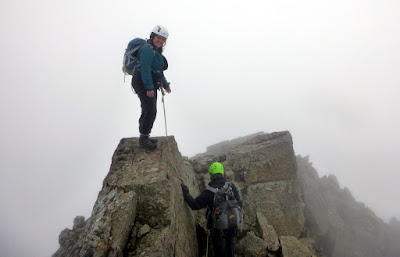