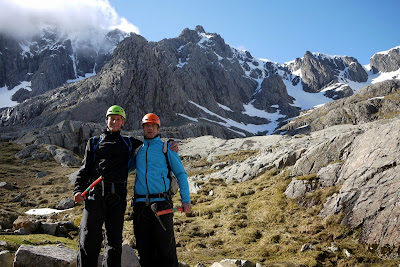 For Jeroen and Kees's second day in Scotland and second day of climbing we went for the super classic Tower Ridge on Ben Nevis. Even though it is mid-May and we have had some warm sunny days we took ice axes and crampons. There is still extensive general snow cover and I thought the top sections of the ridge would be icy. I was not wrong. 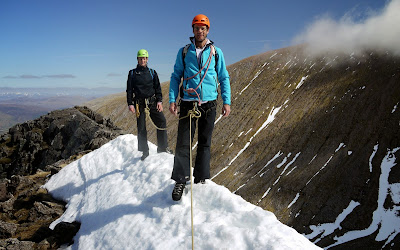 In fact there is snow at the bottom of Douglas Boulder and in Douglas Gap East Gully. All of this was soft enough by the time we got there for us just to kick steps. There was a good freeze last night though and there was ice in a couple of shady spots. The first narrow section above the Douglas Gap also had a nice snow crest on it. 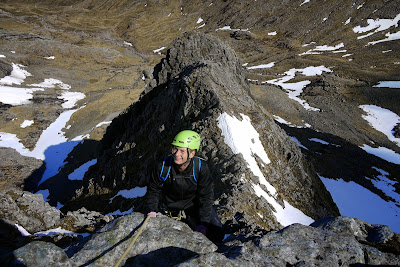 The rock was completely dry all they way apart from where snow was melting and dripping onto the rock. There are a few patches of snow below and above the Little Tower but again it was all soft enough when we were there in the sunshine for kicking good steps. 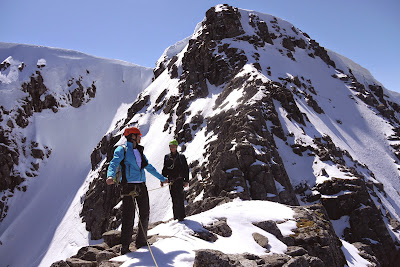 On the Eastern Traverse there is some icy snow and care is required to go around the last bit of the traverse. The Fallen Block Chimney is still full of snow but it is easy to go around to the left of the block. Tower Gap is dry but the very last section onto the plateau is steep hard snow and crampons are recommended for this bit. 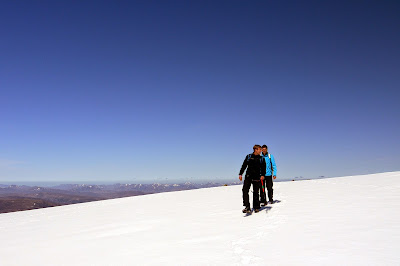 There was one other team on the North Face climbing ice on Observatory Buttress and there were plenty of people enjoying the warm sunshine on top. A few big gullies were skied yesterday including Number Three Gully and Number Two Gully and we were admiring the tracks today.

To top off an amazing two days of climbing we got very close to some red deer on the way down to the van! If only it was always this nice in Scotland! Then again, if it was we would get no snow and ice to play on and that just would not be right.