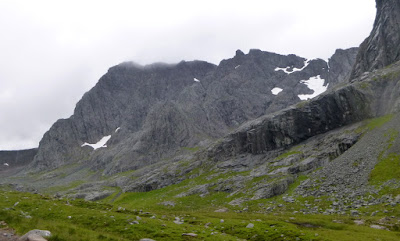 The jet stream, the high stream of air from the Atlantic, has been running to the South of the UK for a month or so when usually it is running over Scotland. As a result the temperature here has been much lower than normal and much higher in the Alps. There has been a heatwave in the Alps for many weeks making the snow melt very fast, creating rock fall and bare ice on many glaciers and climbs. Here the snow has been melting very slowly, there was a huge amount of it at the end of the winter and it snowed last at the start of June, just seven weeks ago. It's not surprising that there is a lots of snow still on Ben Nevis. 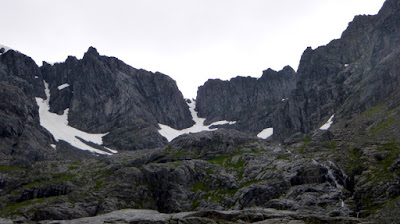 The big gullies are still mostly full of snow. Numbers Two, Three and Four Gullies are all nearly completely full of snow. Number Five Gully has snow at the base on the way to Ledge Route and patches higher up. There is snow down to the lochain in Coire na Ciste and at the foot of Observatory Gully. Since it is very nearly August my guess is that much of this snow will stay with us into next winter. 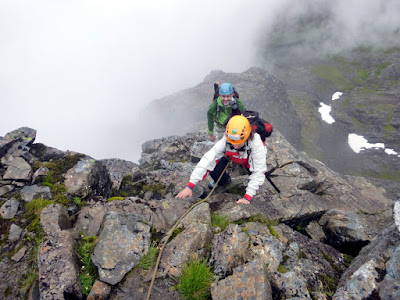 So Joel and Leigh, who live in France near the Spanish border, had a bit of a shock with summit temperatures of just a few degrees and wet rock to contend with. They do a lot of climbing in the sunshine on dry rock so this was a new experience for them and they had a great time. We went up the classic Tower Ridge and had the entire North Face to ourselves. 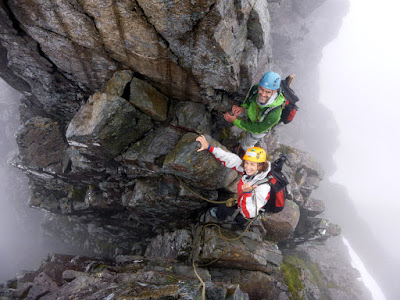 We made good progress and found no snow on the ridge at all. The fallen block chimney is clear as well as the exit gully. Despite the rain we had good views as the mist came and went until we got to the Great Tower. Tower Gap was in the mist as was the summit unfortunately. 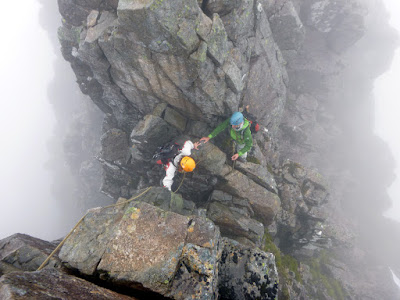 So Joel and Leigh discovered there is a lot of fun to be had climbing in the rain and decided to give it a go back home in the Pyrenees. I'm not sure it will catch on there though! 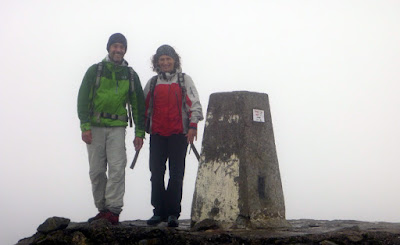