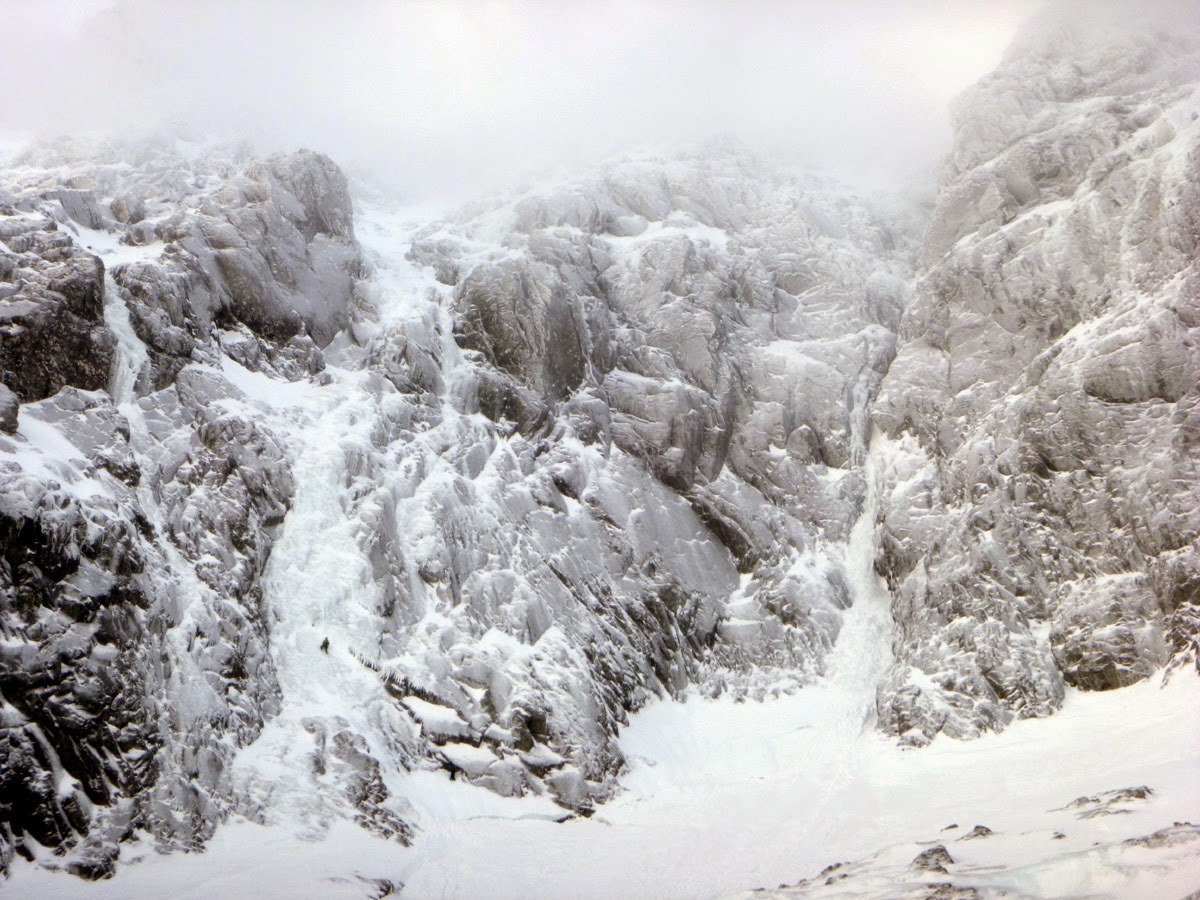 Mick and I got up early today to get to Point Five Gully first. Light wind, no spindrift and top quality ice made it a popular choice today and we did not want to be behind anyone. The plan worked and we enjoyed a very mellow climb with great views and brilliant climbing. We got to the top at 1pm so we had time to go down Number Three Gully to climb Thompson's Route as well which is also in brilliant condition. 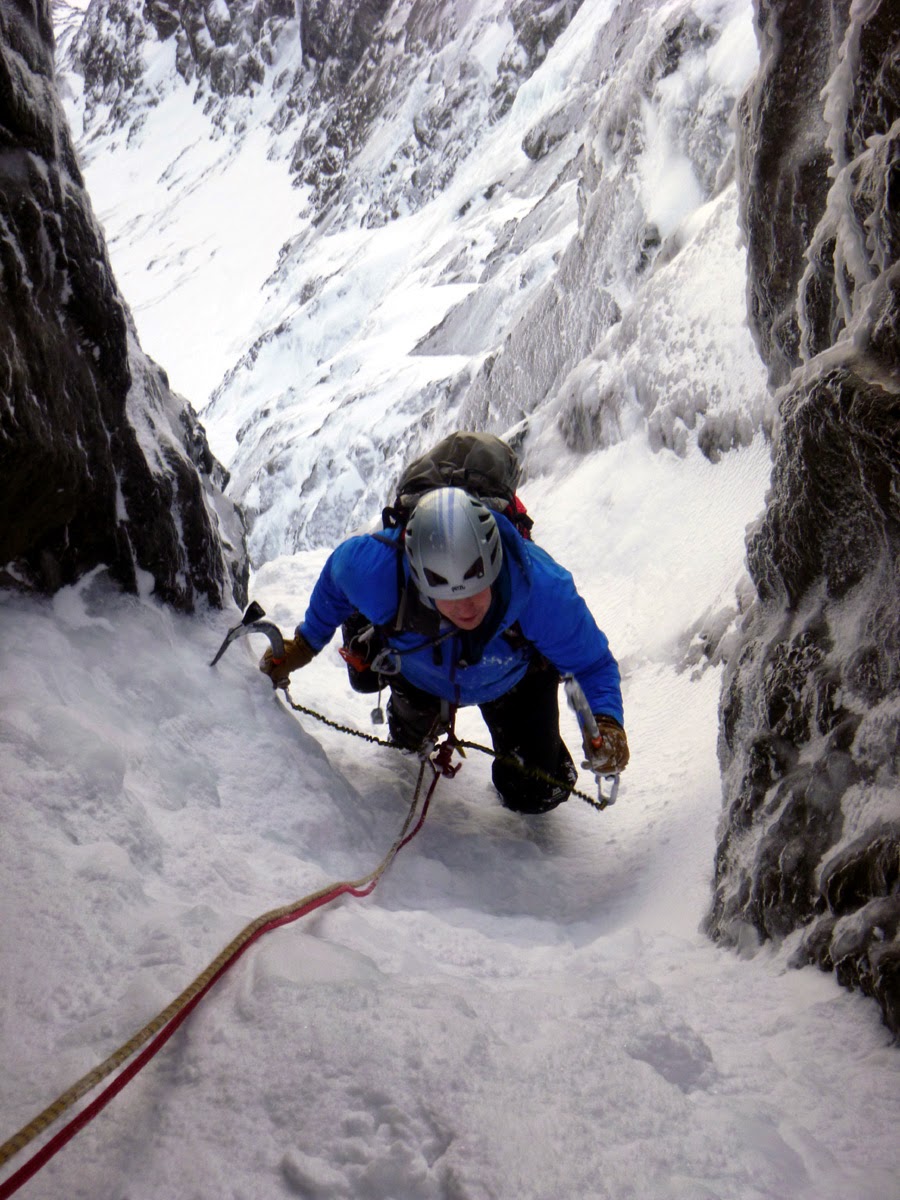 The first three pitches are all quite steady at the moment with no real hard bits. The bulge on the first pitch can be avoided on the left as usual when it is formed well enough, the Chimney Pitch is fun all the way and the Rogue Pitch is straightforward and well protected with ice screws. 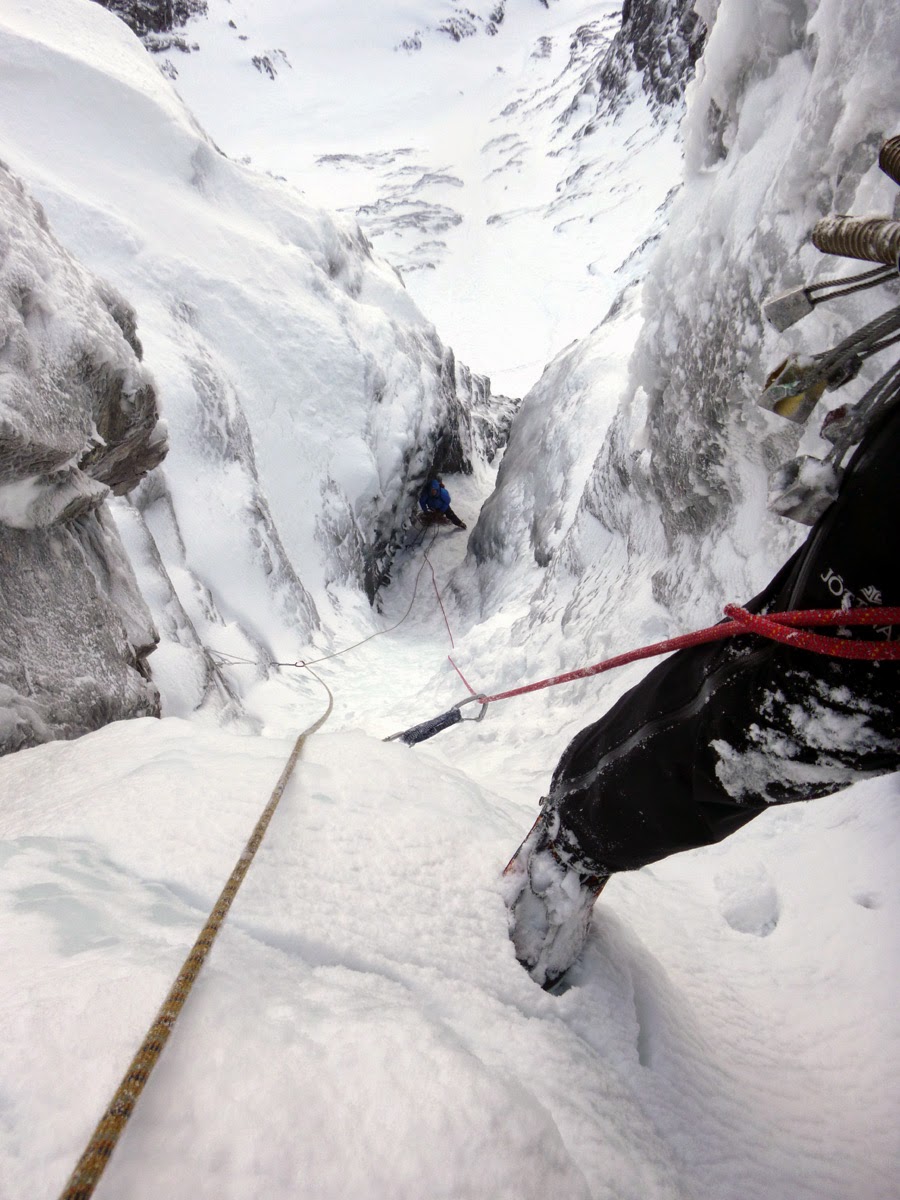 Meanwhile Louisa, Andy and Ritchie climbed Hadrian's Wall Direct and had great fun too. The ice was very good and there were a few teams climbing the route. 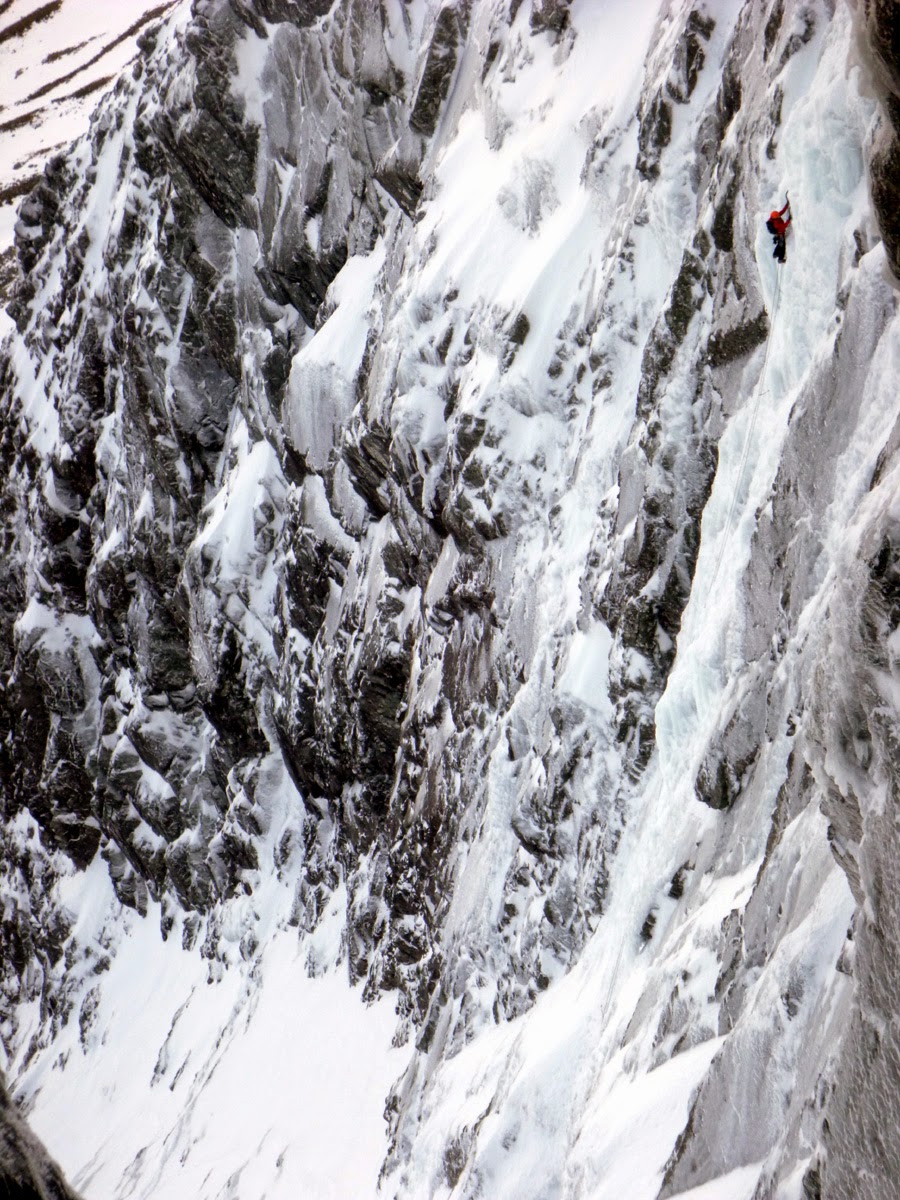 Over all there is little change from last week. We have had gentle thaws and gentle refreezes which has made general snow cover very hard and icy in most places with just a few patches of softer snow. The snow line is at about 650m or so. All the major gullies are full and have small or no cornices. Number Four Gully cairn is nearly buried and a snow bollard is in place. 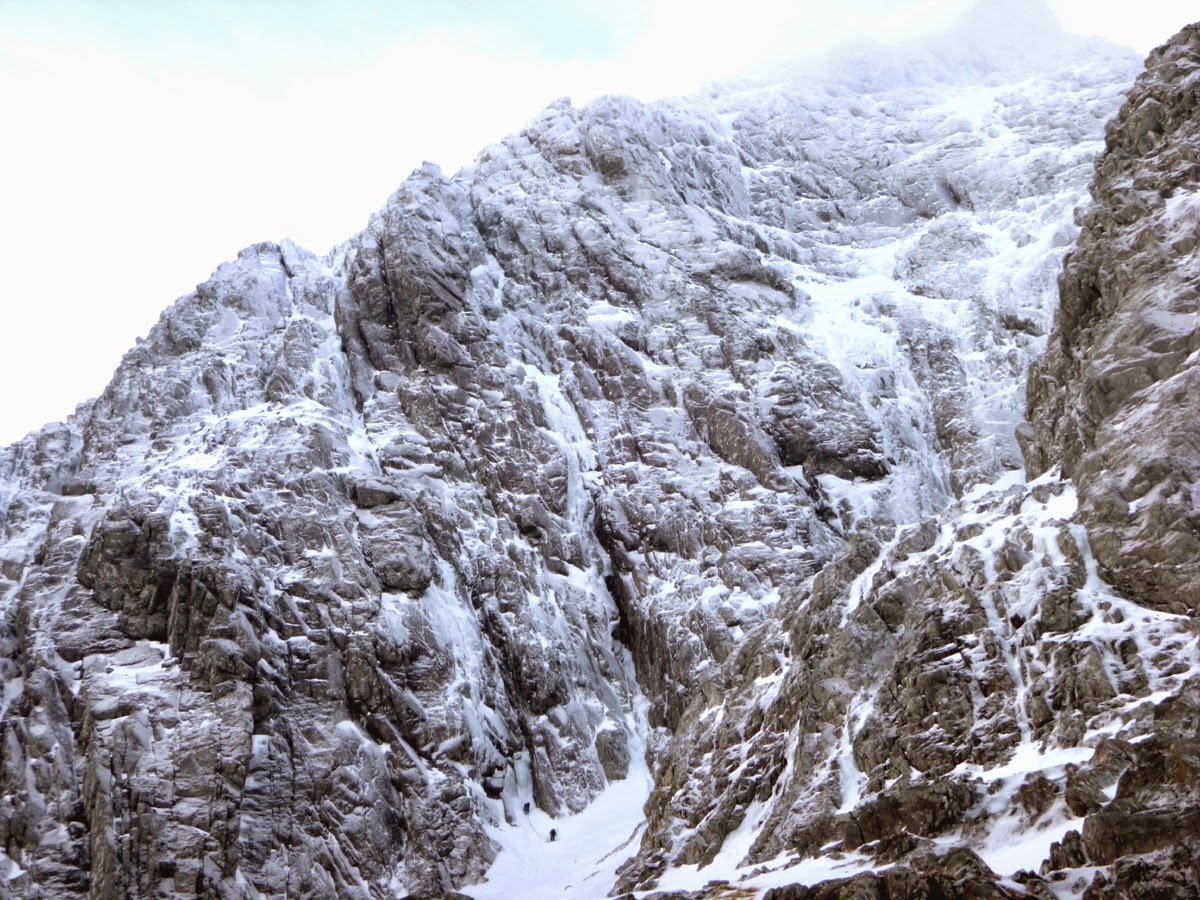 Minus Two and Minus One Gullies have both been climbed but they are quite thin. Orion Face is still not formed at the Second Slab Rib. Zero Gully, Hadrian's Wall Direct, Point Five Gully, Smith's Route, The Cascade, Vanishing Gully, The Curtain and Boomer's Requiem are all very good. Plenty of lower grade ice climbs are well formed as well. Mega Route X is very good and The Shroud has been climbed on the right side. The bottom pitches of The Shield Direct and Gemini are a bit skinny now and Nordwand is a bit hollow in the first pitches. 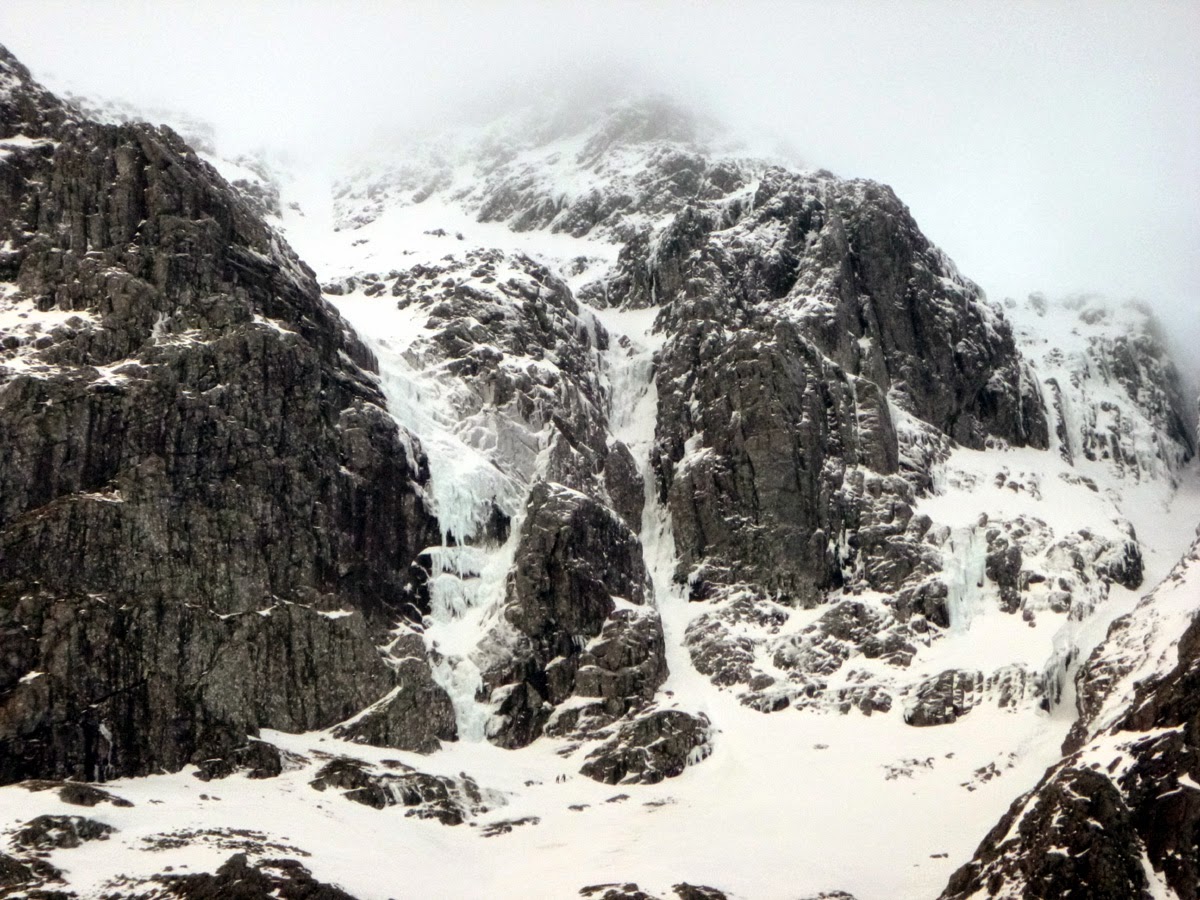 The great ridges are well filled in and good fun. Mixed climbs high up have lots of ice in the cracks.

On other hills, Aonach Beag North Face has good climbing including Stand and Deliver, Royal Pardon and Camilla; Aonach Mor East Face is good with plenty of ice routes including Typhoon.

So with great climbing and a good enough weather forecast next week, make sure you come to Fort William for climbing and The Mountain Festival 18th to 22nd February  www.mountainfestival.co.uk